Buhari’s Re-election And The Igbo Sycophants Endorsing Him 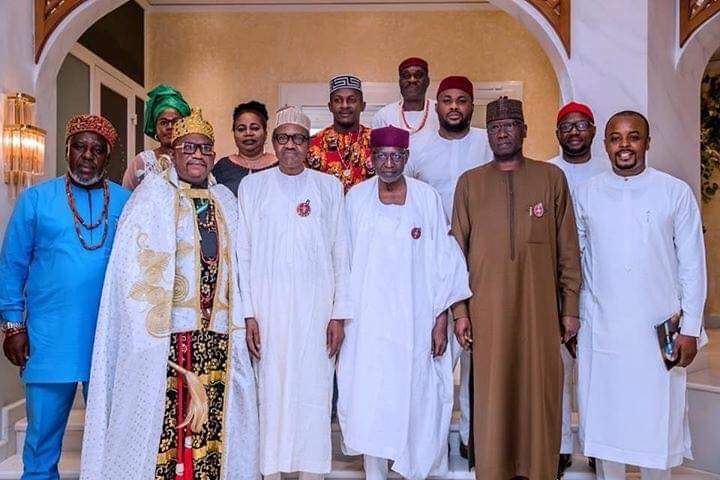 By People & Polity
The Northern oligarchs purposely denied some Ndi Igbo sense of history, so that their current generation will not know what happened. It’s actually working because a number of the Igbo youths who are supporting Buhari due to his Greek gift of designating Anambra as oil producing state because of the election. This was something Goodluck Jonathan did 6 years ago, but Buhari canceled it immediately he came to power.
They are now celebrating federal highways in Southeast, which never witnessed any construction since Buhari’s over 3 years of maladministration, but now have the presence of few road construction equipment because of his reelection campaign.

The roads were all awarded by the last administration, but the same hate-filled Buhari canceled them all when he came to power.

They are also circulating a propaganda picture of second Niger bridge, saying it’s 44% completed, while in actuality it has remained where Jonathan left it. Isn’t it funny that southerners now see road construction in the East now as a privilege given to them by the government and not as a matter of right?

It’s the same Buhari who took Igbo chieftancy title and answered Okechukwu during his electioneering campaign, yet vowed in an interview on international television that he would not treat Ndi Igbo like others because we they gave him 5% votes. And he didn’t just threaten, but he carried out his threat to the last.
This is the same man who declared operation Python Dance on peaceful protesters who did everything within the ambits of the law, while turning a blind eye to his herdsmen brethren who have been killing and maiming, and are still doing so till now.

The same man buried Igbo youths in shallow graves and poured acid on their bodies.

Remember what happened in 2011 when he lost elections?

It was Ndi Igbo that were killed. Igbo Corp members were murdered in cold blood by the order of the vindictive Buhari!
Do you know the people he referred to as dogs and baboons that will soak in blood if he had failed to win 2015 elections? It’s Ndi Igbo. His ambition is worth blood of Nigerians especially Ndi  Igbo.
This is the same man who borrowed to build railway that will connect the whole country and excluded southeast. The same man who is the reason why millions of people lost their jobs.
Have Ndi Igbo suddenly forgotten about his lopsided appointments in a hurry?
The worst part is that the so called Igbo party APGA have been bought over and they had a deal that started with Anambra gubernatorial elections to support Buhari and the APC.
That’s the reason why they are saying 4 is better than 8. The deal is gradually unfolding, and by 2019 it will become clearer to all and sundry.
The oppressors are now playing the victims and making their victims look like the oppressors.
Let all Ndi Igbo realize that they don’t really care about them, and that the olive branch they are extending to them is just to use them all over again, and dump and kill them when they are done.
They have not stopped loathing Ndi Igbo or calling them slaves, and they will do anything to keep them down and perpetually underdeveloped, because they know what Ndi Igbo can do when they rise.
There was an unwritten agreement to under develop Southeast since after the civil war.
Ndi Igbo wake up from your slumber, it’s a new dawn!