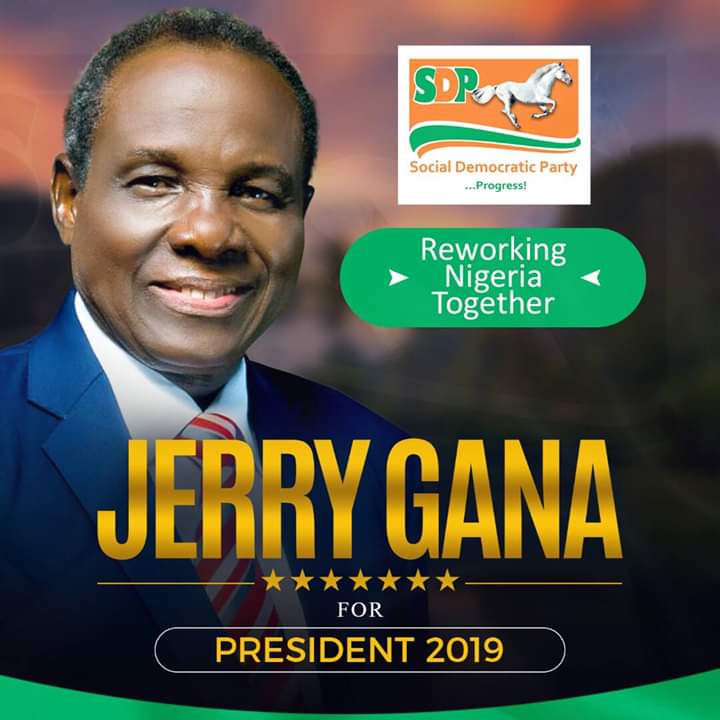 An FCT High Court sitting in Maitama on Friday declared a former Minister of Information, Jerry Gana, the winner of the presidential primary election of the Social Democratic Party (SDP) conducted on October 6.

The party had declared a former governor of Cross River state, Donald Duke, the winner of the election and its flag bearer for the 2019 presidential election.

As Jerry Gana was not happy with the outcome of the primaries, he went to court seeking to be declared the winner in line with the zoning and rotation formula of the party’s constitution.

In his judgment, Justice Hussein Baba-Yusuf held that the regulations contained in the party’s constitution were binding on every member and must be obeyed.

He stated that the zoning and rotation formula as contained in the party’s constitution stipulated that both the chairman of the party and the flag bearer should not come from the same zone.

“The law has crystallised that political parties should abide by the regulations which they have made by themselves.

“The claimant laid sufficient evidence to have the judgment in his favour; it is a clear violation of the party’s constitution; the court cannot wave over illegality.

With the above facts, The judge, declared Mr Jerry Gana the winner of SDP presidential primary election conducted on October 6.

He also declared Mr Duke’s 812 votes null and void and ordered SDP to forward Mr Gana’s name to the Independent National Electoral Commission (INEC) as the party’s flag bearer for the 2019 presidential election.

He ordered that Mr Duke should stop parading himself as the party’s flag bearer for the election.

Mr Gana sought a declaration that Mr Duke was not eligible to stand as a candidate in the party’s presidential primaries held on October 6 in Abuja.

He also sought a declaration of the court that he ought to have been declared the winner of the SDP presidential primary election, having polled the highest valid votes in the said election.

The former minister wanted an order of the court declaring him the validly elected flag bearer of the party for the 2019 General Elections.

Mr Gana also sought a perpetual injunction restraining Mr Duke from parading himself as the SDP presidential candidate for the elections, among other reliefs.

He had argued that under Article 15(3) of the SDP Constitution, the office of the national chairman of the party and the presidential candidacy shall rotate between the northern and southern parts of the country.