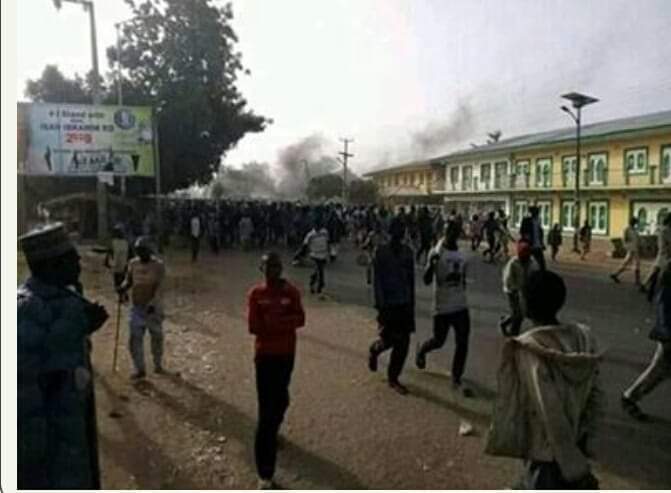 Residents of some parts of Zamfara State, Nigeria on Monday protested against the worsening insecurity in the state.

Hundreds of people have been killed by bandits in the North-west state in 2018.

Many others have been kidnapped for ransom.
On Saturday, at least 18 people were killed in Birane village in Zurmi Local Government Area of the state.

A resident told reporters that the protesters who came from surrounding villages converged in the local government headquarters where they joined others villagers who were already taking refuge in Tsafe since their communities were attacked by bandits.

An eyewitness told reporters that the protesters destroyed political billboards of President Muhammadu Buhari and the state governor, Abdulaziz Yari.

The protests later degenerated into a riot.
“The protesters began by blocking the highway and burning tyres, but as we speak, the local government secretariat in Tsafe is on fire,” an eyewitness, who declined to be named for security reasons, said.

The protest is coming after armed bandits on Sunday attacked Sauna village in Tsafe Local Government Area killing many residents and displacing hundreds of others.

During the riot, the protesters also burnt down newly acquired motorcycles meant to be distributed by the local government chairman.

The Tsafe local government chairman, Aliyu Abubakar, earlier on Monday told BBC Hausa about the deteriorating security in the state. He appealed to the federal government to intervene more in the crisis.

He said the bandits on Saturday night killed a district head and burned houses at Asaula community, Mr Abubakar said more than two thousand people are taking refuge in Tsafe apart from those staying with their relatives.

Apart from Tsafe, other Zamfara local governments most affected by the attacks include Zurmi, Shinkafi, Maradun, Maru and Birnin Magaji. Birnin Magaji is the hometown of Mr Dan-Ali.

When contacted, Mohammad Shehu, the Zamfara police spokesperson, said the situation is being controlled by the police.

He said the state police commissioner, Usman Delel, and the heads of other security agencies in the state had visited Tsafe to help restore normalcy.

He said the police commissioner has deployed more mobile police officers to complement the efforts of the existing security officials in the area.

Mr Shehu said the protest was championed by some miscreants.

He said no death was recorded and the police had arrested many miscreants with dangerous weapons. He said an investigation is ongoing and calm has returned to the area.