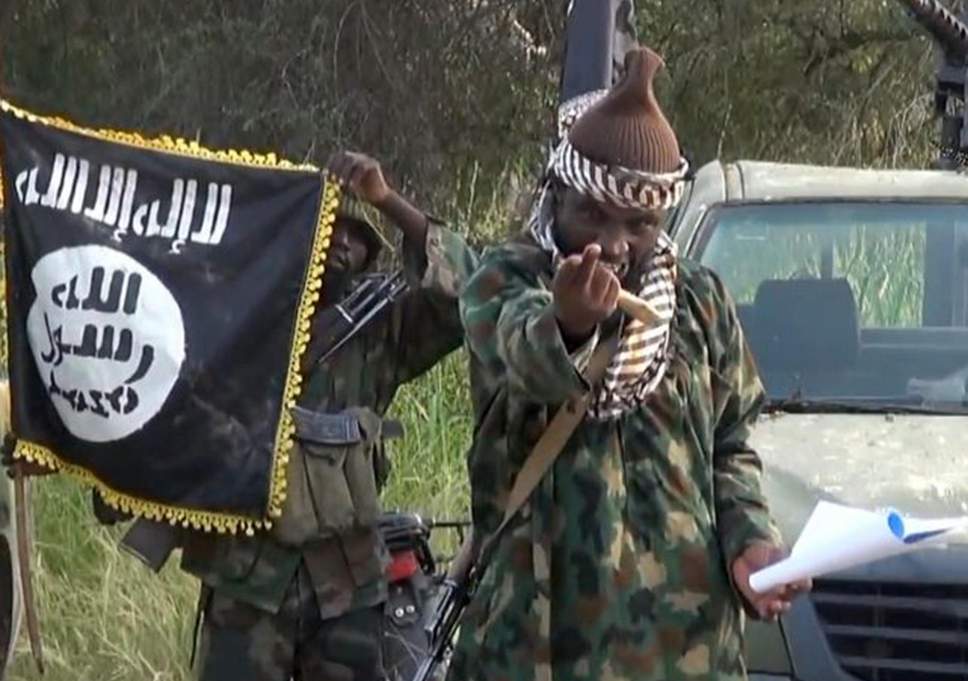 Photo:  Shekau with his member group.

Day by day, towns that were hitherto liberated by the former President Goodluck Jonathan’s administration fall, yet everywhere remain silent as if nothing is happening.

Time after time military formations are sacked, yet the man who promised to lead from the front is having a swell time and look unconcerned.

From Metele, to Kekenou, to Monguno, to Baga, the attack has increased.

I remember when Governor Kashim Shettima of Borno bragged that Borno state residents are now sleeping with their two eyes closed.
I wonder if they still sleep at all.

It has graduated from laying ambush on our soldiers, to frontally taking on military formations, sacking them all and inflicting heavy casualties.

Soldiers now die in hundreds and no longer in tens.
They miss in hundred and ‘Buharists’ are not perturbed.

The denial by the military have increased, yet the results are no longer hidden again.

They try as much as giving those soldiers who are heroes secret burials, just to hide them from the glaring public.

Thanks to social media, the soldiers in the front line and the families of the slain soldiers who come out to tell the truth about the situation.

Nigeria military have been overwhelmed, and the mobile policemen called into action ran for their dear lives. I commend the policemen for being brave enough to run away, as Nigeria is not worthy to die for. The former Chief of Army Staff, Lt-Gen(rtd) Azubuike Ihejirika freed Baga and other towns, yet he was threatened to be dragged to ICC by Northern elders.

Goodluck Jonathan whom they called clueless freed all these towns and conducted elections there, but all the towns have fallen, and everybody seems to be happy with the situation.

What is Dasuki still doing in the dungeon?
As we thought that since he was caught and incarcerated, those weapons he was made to buy would have come out; still they have no evidence to jail him going to 4 years now.

What about the billions of dollars they have have expended in the fight against Boko Haram?
No results to match the fund
It has only been hype.

Have they added arms and ammunition in the armory of the military?
Nothing at all was added
Instead the generals are enriching themselves, while soldiers are dying in the front line.
Blood money!

What about the super Tucano aircraft, it will take years before they come.

I wonder which adjective they would use to qualify their defeat against Boko Haram now, as their “Technically” has turned out to be the biggest farce. This is not only laughable but very pitiable.

They are all tired of telling lies, and ‘King of Lies,’ Liar Mohammed is nowhere to be found again.
He is overwhelmed and confused.

If they called Goodluck clueless for looking for arms at all cost even from the black market, when Nigeria was placed on ban in the arms market, what would they call Buhari now?

Is the world not watching the decimation of Nigeria military by terrorists; or is it only when the president is booed that they watch?

What has the relocation of the military tactical command to Borno achieved?

His promise of ending the Boko Haram menace in 3 months, has spiraled to almost 4 years and they are giving excuses and have kept on blaming everyone but them.

Where is the general that promised to lead the fight against Boko Haram from the front?
He was in Akwa Ibom dancing and campaigning like a first timer, and not like an incumbent.
Same thing they accused Jonathan of, is what he is comfortably doing.

It has always been lies, deceit and propaganda!
Buhari/Jubril must go at all costs!