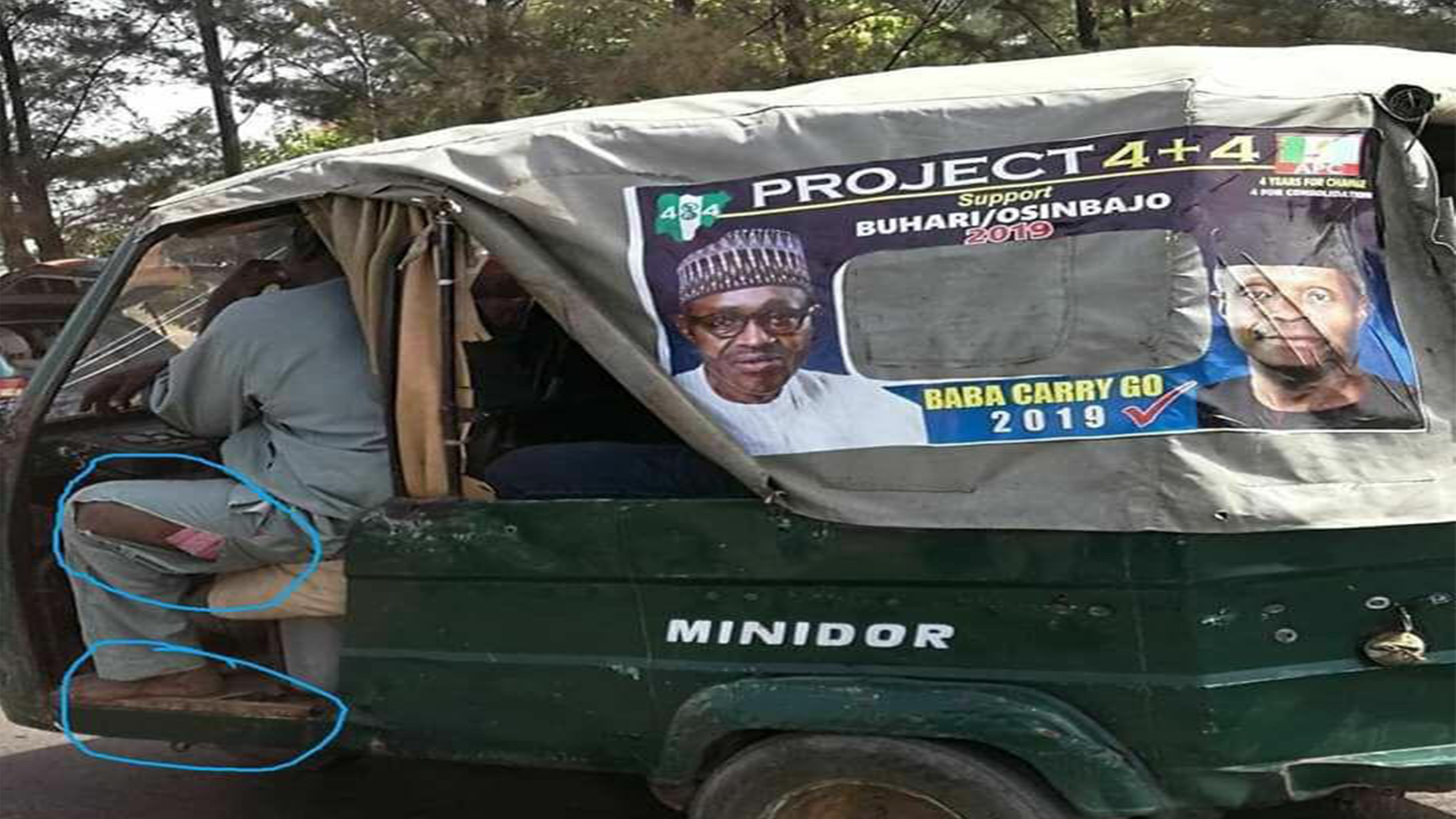 Buhari's supporter struggling with his tricycle

The above in italics are part of the song by the Afrobeat king Fela Kuti.
Like all his songs, suffering and smiling has remained evergreen and most importantly has not stopped showing the everyday life of an average Nigerian.

The song was released decades ago, but it’s still very relevant in our lives as Nigerians and in the polity too.

The cases of jumping buses and bad transport system; people standing are much more than the ones sitting.
People being packed like sardines to get to their destinations; issue of light, water, traffic jam, police and military brutality, poverty, workplace issues, have persisted and are showing no sign of stopping.

But the baffling thing is that Nigerians are now used to suffering, that they think it’s normal.
That’s the only reason that can justify why we are one of the happiest people in the world.

Most of us now see the government providing basic amenities for the people as they doing us a favour.

It’s indeed surprising that there are still people defending poverty and serious suffering in Nigeria.

Nigeria is the poverty capital of the world and has broken almost every poverty index.

The killings rose astronomically, that more people have been killed in Nigeria in 2018, than in war torn countries like Syria.
We have not been divided along ethnic and religious lines than we are today.
Almost all the fibers holding us together have broken.

What divides us is much more than what unites us.
The politicians pit us all against each other, to their own gain.

The Change that was meant to come became a hoarse.
It became the biggest scam of all time.

Suffering increased as we became poorer.
All their promises were jettisoned.

They never had a plan and just concentrated on hounding opposition, so that they will be able to steal more.

This present administration has been the worst in the history of Nigeria, in terms of lawlessness and flagrant disobedience to the rule of law.

They enchanted some people, that they are suffering and smiling and are still defending the government that plunged them into penury.

They quote constitution to absolve the President of his wrongdoings, yet prefer jungle justice when an opposition is accused.

They traded their common sense for crumbs, yet they are in deep suffering and are still smiling.

Educational systems are on strike, and the workers are bracing for their own shutdown, yet the government is reluctant to approve the 30,000 naira minimum wage.

Anyone still supporting Buhari shouldn’t just be tagged an enemy of Nigeria, but an enemy of humanity.
The records are there and are not hidden that he has broken every record on human rights.

To those of us who are suffering and smiling, people like us that had opposed the emergence of Buhari, are better off today.

We were prepared because we knew him before hand.
We girded our loins in preparation for this time.

Even if Buhari comes back today, we will still be comfortable; though it’s practically impossible for him to come back to power.

Fela ought to be officially recognized by Nigerians as a prophet.
Everything he sang decades ago about bad governance in Nigeria is still there today.

Indeed Nigerians are comfortable in their sufferings, and are smiling and happy with what other people can’t stand.