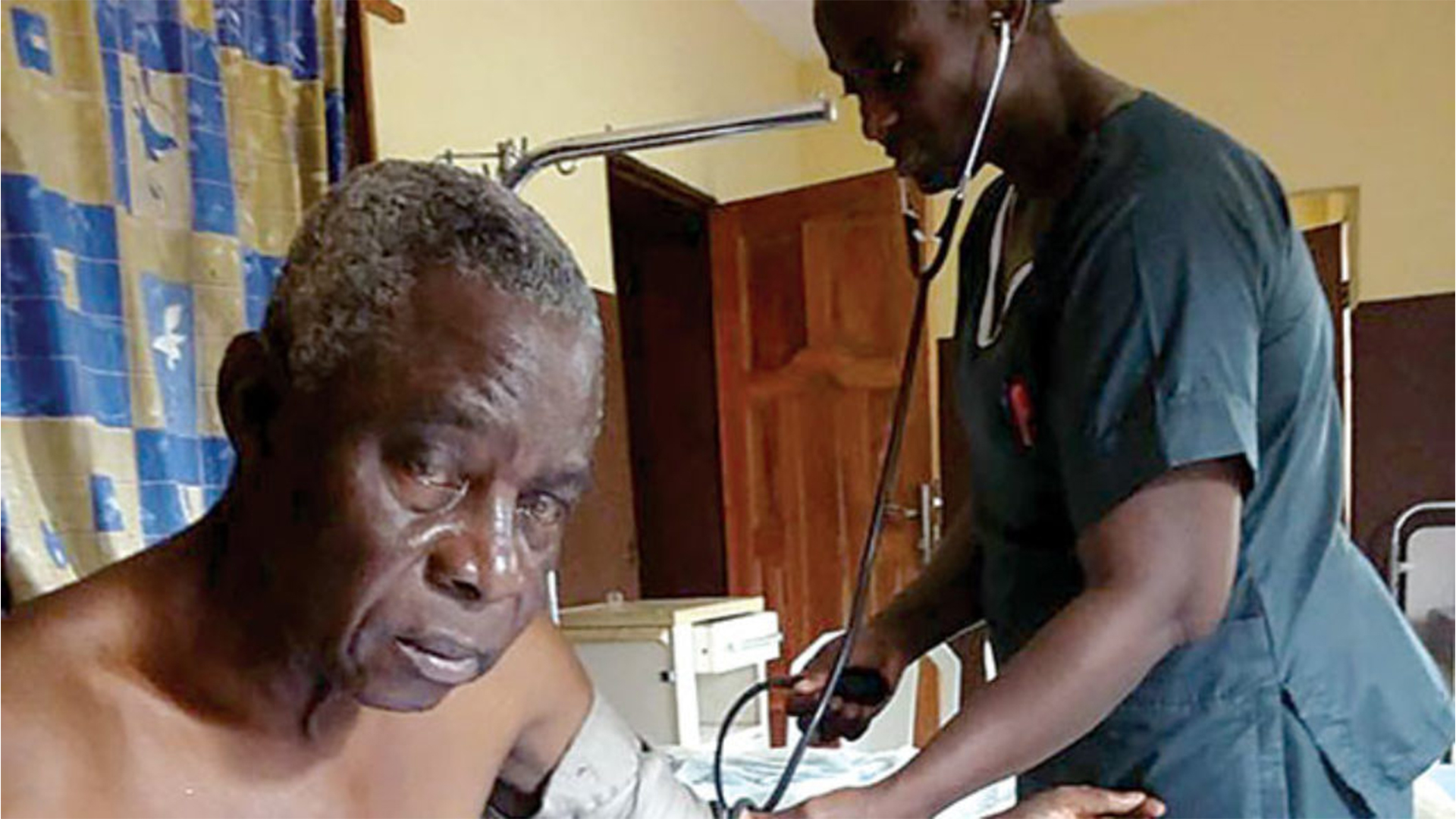 The Guardian journalists walked through the front door, into the cramped living room of Chief Eddie Ugboma. Everywhere was stuffy with medical and health aids seated at different points in the house. The floor, walls, even the ceiling seemed to sway. But the windowpanes fitted well for his chimeric world. He enjoyed looking at the sunset from the window. It is his door to the world. He sat on the three-sitter couch in his house, breathing heavily. His ribs and collar bone jutted out. Comforters stuffed into the couch. The veteran filmmaker was deep in a haze, so drunk with medications that he would later say he barely retained memory how far he had gone on them. He managed to drink the cup of tea on the table in his front.

There was a small group — his daughter, her friends and some others — in the house. But to him, they were mostly a noisy group. He believed that, as an aged man, he needed more rest than he is getting.But this afternoon was the first time in a month, together or alone, that he’d found them essential to his existence.

“I am seriously ill. The sickness has affected part of my eyes and ears. I can hardly hear very well unless you shout, I can’t hear you. I don’t see properly again,” his story slowly unfurled. “I’ve been going from hospital to hospital, but the doctors have been diagnosing malaria and typhoid. It was on the verge of dying that a young doctor who heard of my complaints and carried out different tests that discovered that I am not suffering from malaria or any of the earlier diagnosed sicknesses,” he said.Though, she looked old enough to be in school, she was home with her dad. That’s the last child of Chief Eddie Ugboma.

‘What’s your name?”
The girl didn’t seem to hear, as she went inside. She brought out some clothes for her father to wear.
“Why are you not in school?”
“Our lecturers are still on strike, no school yet,” she said.
When she bent to talk to her father, he yelped like a lamb.
“I hardly sleep for long both at night and in the day. I am most times in pains in my head. And from the diagnosis I have to go abroad for treatment, which costs a lot of money,” he said.

Ugboma, a man who has worked so hard to give a definition to the Nigerian cinema, breathed heavily, “thank God, it’s not cancer. The boy said there was a disturbance in my brain and it has to be treated abroad. I have been battling with the sickness for long, but nobody knew of it,” he revealed.

To raise fund, he has decided to sell his intellectual properties. His words: “All I need is support; I want people to buy them. I have some documentaries of my 60 years experience in filmmaking, acting, among others, ready. I have my autobiography, my TV talk show — 60 episodes of 30 minutes each. I also have two galleries of the Hall of Fame, which I expect the Lagos State government to buy. With the support of well meaning Nigerians I should be able to raise the N50 million needed for my treatment.”

For the talk show, he interviewed history makers and shapers from politics to entertainment; it is great. “I want to show three of movies in the cinemas now. I have taken the trouble to transfer them from celluloid to DVD. I have spent a lot of money doing this. The Hall of Fame is a historical centre,” he said.

Almost choking, he said, “I just want them to acquire my works, which cut across history, performance, music, and biographies, among others. If you take a good look at the works, you will see that they would be of immerse use to students in the Departments of Theatre Arts, English language, Filmmaking, Creative Arts, History and also, for anyone that wants to know the Nigerian story. As a resource person in one of the Nigerian universities, I asked a final year student what was ‘cutaway,’ and he could not explain it. I did not blame him any way because many Nigerian universities do not libraries or galleries students could go to. So, my works would be of help to these students. In fact, they are like encyclopedia, but situation has made me to want to hand it over to government whenever they are ready.”

According to him, “I would also want my state governor, Dr. Ifeanyi Okowa; Lagos State government and the Presidency to help to save my life. I appreciate President Muhammadu Buhari for wishing me a happy birthday when I clocked 78. I know he didn’t know I was ill and on sick bed then.”Ugboma is not cowed by his current misfortunes. Though the illness has given him a punch, he wouldn’t stop discussing the Nigerian movies.

His first reaction to independent producers not having access to the cinemas, especially the recent experience of Genevieve Nnaji with Lion Heart. “If I put big money into my movie, I would make sure I recover it before anything else. We need more cinemas in the country and I will keep on asking this questions, what are the viewing centres in the 774 councils of Nigeria used for? Let them be converted to cinemas and it would help the industry,” he said.

He continued, “ filmmakers and Nigeria Film and Video Censors Board should team up with Nigeria Film Corporation. There about 20 to 30 million Nigerians that have decoders in their homes, let the companies responsible for the decoders release N200 per decoder from the amount they charge and we put the money in a film fund, then there will be huge money for filmmaking. Let government have a film fund, not the kind of ‘contraption’ we had before, when some filmmakers were given N5 million each to make movies and that was all. Stakeholders have to revolutionise the industry. They should put pressure on government to stop the importation of foreign films into the country. When the Indians see any good movies outside their shores, they go back to shoot theirs. They do this, because they know that 25 per cent of their revenue comes from filmmaking.”

It seems he has finally forgotten about Isaac Adaka Boro film that he had trumped for years. Does he now have partners to produce the documentary?“Adaka Boro was my hero. I was to do a film on him, but his people blocked it.
I have been to Rivers and Bayelsa States for them to partner with me on this documentary, but this has not yielded any good. I have, at a point, challenged Gov. Seriake Henry Dickson of Bayelsa State and he promised to release money for the entertainment industry and that I should from there get money for the project. It is unfortunate that till date, nothing has come out of it,” he lamented.

As an old man, who has right to pray and bless people, he believes Genevieve and Mo Abudu deserve his prayers, for investing millions of Naira into movie making. Saying regretfully, “Mo Abudu and Genevieve have been releasing their works, but the truth is the industry is 90 per cent dead. Not in slumber, but dead.”

He asked, “how many CDs do Nigerians buy today? Most filmmakers cannot even sell a thousand copies. This is because marketers are bringing in foreign films into the country; films that are 20-in-1. The Federal Government has Department of Video and Film Censor Board, yet these films find their ways into our markets. You cannot do this in England. You cannot even try it in Ghana. Ask the Nigerian big stars when last they were invited to act in movies, you will discover that the industry is dead. Some of the big stars do not earn up to a million again, so they go for N200,000 and even lower pay for acting. So, why cannot we say the industry is dead? Some of the producers and directors have been driven away from their flats. I know about 12 marketers who are now in South Africa doing menial jobs. And this is supposed to be one of the biggest industries in the world.”