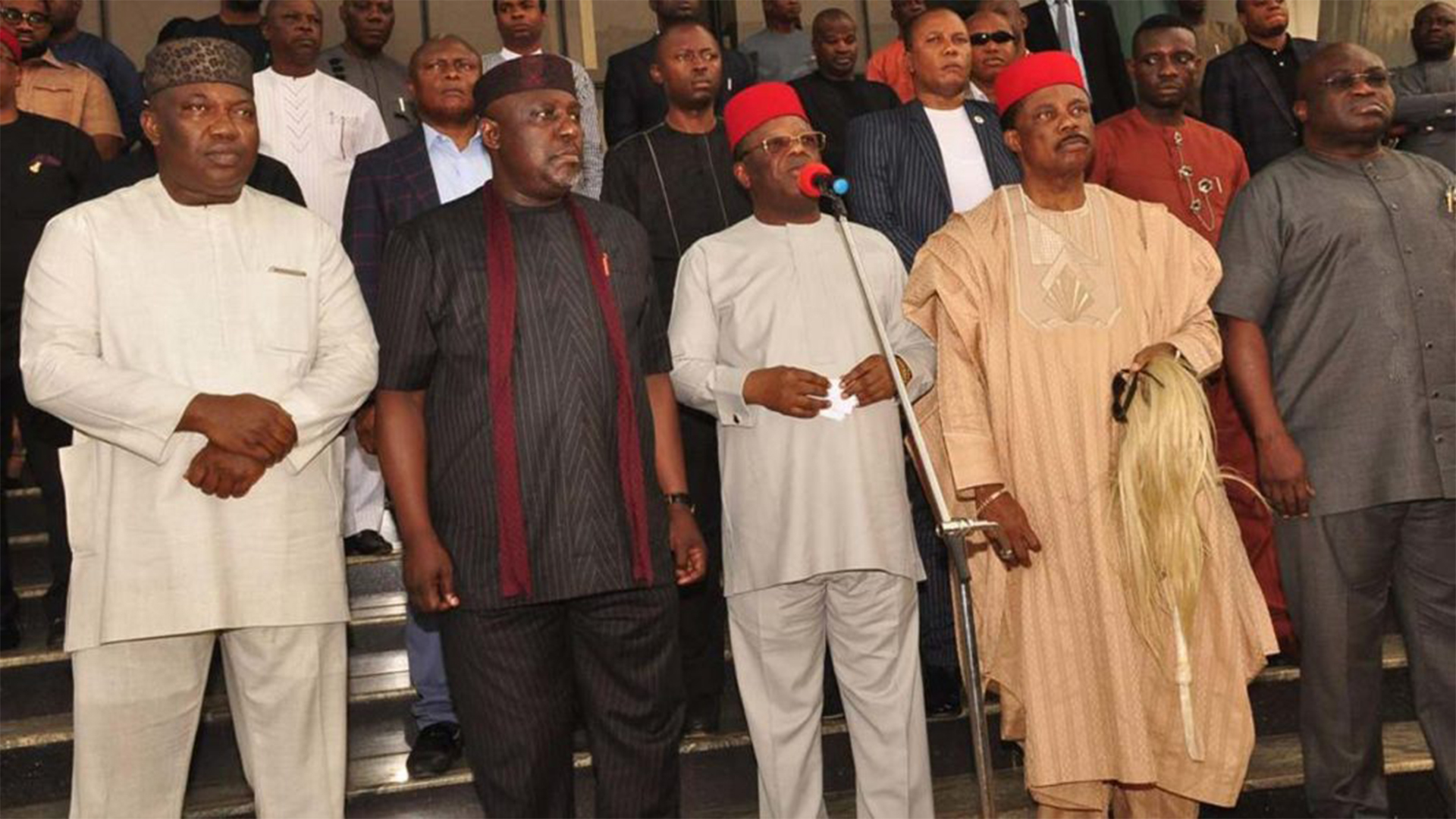 Just as Afonja sold out, and because of his inordinate ambition, enlisted the Fulani through Alimi to help him fight his brothers, his subsequent fallout with the people he enlisted, his death and takeover of Ilorin by the Fulani; so it is in the South-East during Saturday 23rd February sham called elections.

The personal ambitions of these lots, made them connive with Jubril (Buhari) to rig the elections in the South-East.

They systematically agreed after a meeting that all the South-East Governors must give Jubril (Buhari) the constitutional 25% of the total votes cast in every state.

Their plot was largely successful, but think about this.

If Buhari could not get more than 168,000 votes in 2015, when he had done nothing to the Igbos, what makes you think he can get up to 403,968 votes after killing, maiming and marginalizing the Igbos?

Igbos are defiant and have stood their ground against Buhari, and it’s practically impossible for them to give him more votes than he received before, after 3 versions of Python Dance, his lopsided appointment, and tagging the Igbos 5%ers.

The AFONJAS who made it possible are:

1. Willie Obiano (Governor of Anambra state)
Willie Obiano played a very crucial role against the Igbo interest.
It all started in 2017 during his second term bid.
He signed a pact with Jubril (Buhari) and the APC, to deliver him, so he can work for Jubril (Buhari)’s re-election.
Buhari delivered him, and he sure kept his own side of the bargain.

He rather went extra mile to frustrate the PDP because of Peter Obi, the man that helped tremendously to make him Governor.
Willie was afraid that if PDP should win, he was going to prison, because Obi has evidences of all his financial misappropriation.

It was part of the reason why Obiano insulted Ohanaeze for adopting the PDP, and even sponsored the Secretary General, Mr Okwukwu to break the organization.

His Chief Press Secretary James Eze had bragged that Obiano supported Jubril (Buhari) because he had foresight, and that the Igbos play emotional politics.

2. The Second Afonja is Senator Ike Ekweremmadu:
Ike Ekweremmadu played spoiler for the PDP ticket of Atiku/Obi.
He was mostly underground, plotting and scheming against the PDP in the South-East, while pretending he was working for the interest of the party.

His anger was that he felt the Vice Presidential slot was his birthright, and got disappointed when Obi was picked.

This is a man who has barrages of corruption cases on his neck.
He couldn’t have wriggled away from Jubril (Buhari)’s persecution.

3. David Umahi (Ebonyi state Governor)
Umahi was the first person to have opposed Obi’s candidature, citing non consultation of the South-East governors, and elders by Atiku before picking Obi as his reason.

He however maintained a very close relationship with Jubril (Buhari), and even rented crowds for him the day he came to Ebonyi for APC Presidential campaign.

He didn’t hide his support for Jubril (Buhari), as he played just in the middle, even as a PDP Governor.

4. Rochas Okorocha. (Governor of IMO State)
Rochas has always been the prodigal son in the South-East, who could sell his wife and children for his ambition.

He has always nursed the ambition of becoming Igbo President and has been ready to do anything to achieve it.

5. Governor Ugwuanyi of Enugu state:
He seemed to be neutral, but he worked with other governors to make sure more votes were added to  Jubril (Buhari).
It was on record that he influenced Inec officials in his state, in their bid to rig in (Jubri) Buhari.

6. Governor Okezie Ikeazu of  Abia state:
The last but not the least in being an Afonja. He willing sold Ndi Igbo out by great encouraging the Python Dance unleashed by the Nigerian Military which claimed lots of lives in Abia. Though he is a member of PDP but he cunnigly worked for Jubril (Buhari)’s  reelection.

These selfish men are the AFONJAS of Igboland, as they aided Jubril (Buhari ) in rigging his way through South-East, and subverted the will of the people.

They frolicked with the one that killed their likes because of their selfish ambition.

Just like they have dumped Okorocha, they would dump all of them one after the other.

These men will definitely end up the way of Afonja, as Karma is still alive.