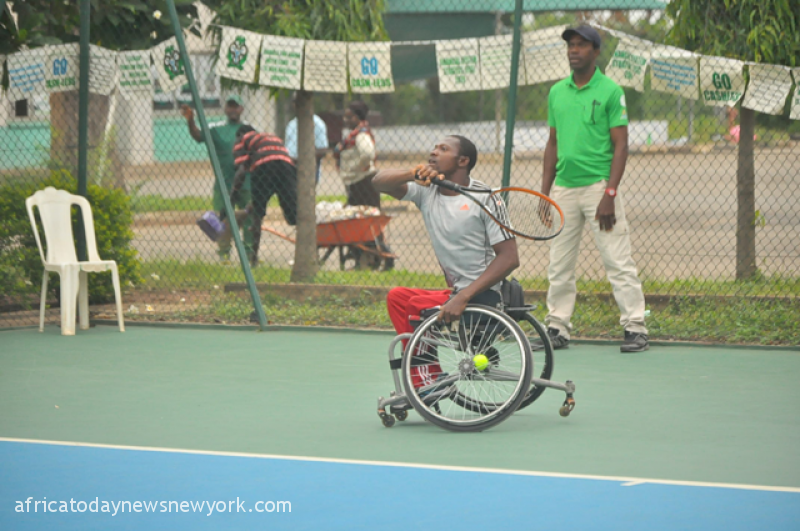 As things heat up in the DavNotch Open Tennis Championship in Abuja, some of the initial competitors which include Promise Simon, Favour Wale and Olatosin Oyegbata have been knocked out in the first rounds of the ongoing men’s singles wheelchair tennis event of the second edition of the competition on Wednesday.

The clashes at the sport complex of Moshood Abiola National stadium saw Simon against Sefiu Ojeleye lose to his opponent in the two straight sets of the game( 0-2) 1-4,2-4.

Simon lost his match to Ojeleye in the men’s wheelchair first rounds.

Adewale Kazeem Akanbi and Ojeleye all defeated their opponents to advance to the quarter-finals of the ongoing championship. Simon said that he was happy that he lost to a better side in the tournament.

“I tried all my efforts to get more points but that was not possible. I played my game well but it’s unfortunate that I lost my game.

”Right now, I will be going back to the drawing board to work more on my training and more professional skills for the preparation of the next edition 2023.so that I can edge past my status now.

“It was such a tough match. He’s such a tough player. I did the best I could to block out the hype. I played my game and fought for every point.

“He’s obviously a great player, he hits the ball big and trusts his strokes, so it was a good test to see me defend against that.

“He kept putting the ball where I found it hard to hit with my drive and that caused me a lot of problems,’’ he said.

“It’s a learning curve for me at this point in my career and I can only get better by playing more of these kinds of matches.

” I give God all the glory for my success in this championship , now I will focus on the next edition,” he said.

He said “I faced a few challenges during the game which I want to urge the federation to help add more umpires to be watching out during players games but I’m happy the way I ended my game in the tournament ,” he said.

“Although my opponent was former number one, I wish my opponent all the best in his next match.I hope he takes the trophy,” he said.