Buhari Thanks Outgoing Ministers For Their Service To Nigeria

May 14, 2022 All Progressives Congress, nigeria 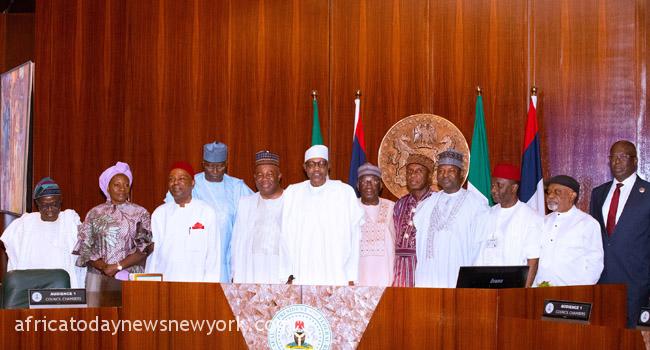 President Muhammadu Buhari has met with ministers who are seeking elective offices in 2023 and thanked them for their services to the country.

In a valedictory session at the Council Chamber in Abuja on Friday, Buhari appreciated them for their cooperation. He also admonished other members of the cabinet to be more diligent and committed to the success of the administration.

On whether former President Goodluck Jonathan has joined the All Progressives Congress (APC), he stated that the party is in the best position to know.

During a briefing after the session with the outgoing ministers, the Minister of Information and Culture, Lai Mohammed, disclosed that ten of them were leaving.

Read Also: Buhari To Aid South Sudan In Their Fight Against Insurgency

According to him, some of the ministers have tendered their resignation while the others are in the process of doing so.

Others are the Minister of Niger Delta Affairs, Goodwill Akpabio; Minister of Justice and Attorney General of the Federation, Abubakar Malami and the Minister of Science, Technology, and Innovation,  Ogbonnaya Onu.

Nine were physically present while the former Minister of State for Education, Emeka Nwajiuba, who is the tenth, was absent.

The meeting follows the President’s recent directive to all ministers and political appointees contesting for various elective positions to resign from their appointments on or before Monday, May 16, 2022.