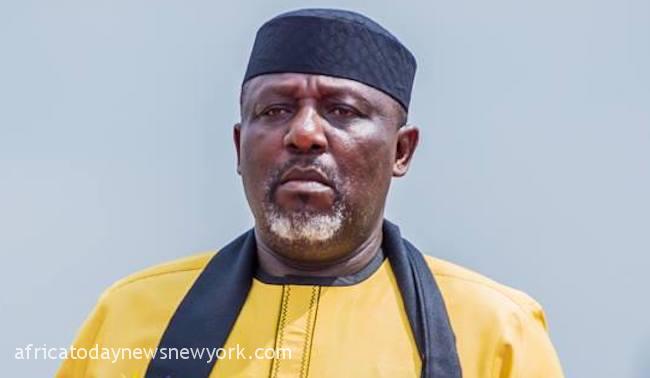 A fortnight ago, Nigeria’s anti-graft agency, the Economic and Financial Crimes Commission (EFCC) stormed the Abuja home of the former Governor of Imo State, Senator Owelle Rochas Okorocha, and apprehended him in a somewhat dramatic fashion. Many reactions have continued to trail that arrest as many Nigerians have chosen to paint the scenario in ethnic, political, and religious garb while derailing from the issue under contention – alleged looting of the common patrimony of the people of Imo State.

The former Governor of Imo State and current Senator representing the good people of Orlu zone in the Red Chambers of the national assembly has been an active politician for over two decades. His foray into the murky waters of Nigerian politics began sometime in 1999 when he was appointed as the Commissioner of the Federal character commission. Ever since then, he has remained a constant figure in the Nigerian polity although very notorious for controversy.

After two unsuccessful attempts at contesting for the Presidency of Nigeria in 2003 and 2007 respectively, he managed to become Governor of Imo State in 2011 on the platform of the All Progressives Grand Alliance (APGA). His eight-year tenure as Governor was a different story all together. Although he recorded a few mediocre achievements, his government was mostly characterised by ugly phenomena ranging from ‘family-tocracy’, blatant looting of resources, and abuse of public trust. It was so bad that when he left office in 2019, he left behind him a badly divided State, loads of substandard projects, a deep hole of corruption orchestrated by mindless misappropriation of state funds – he painfully left the state wearing a forlorn look.

Read Also: 2023: I’m The Most Acceptable Aspirant In The North –Okorocha

It’s important to look back at the antecedents. Rochas Okorocha is someone who many people believe would make a good President. It is pertinent we interrogate these things so we don’t fall into a trap.

Okorocha actually ran a government one can easily describe as ‘the more you look, the less you see’. With him holding sway as the numero-uno at Douglas House, contracts for all manner of projects were ‘awarded’ in the most bizarre manner! Unknown and evidently unqualified contractors were issued contracts at sums which were mostly clouded in unholy secrecy.

Okorocha reduced governance in Imo State to a shameless family affair. With the family and lackeys in charge, they never had any need to follow due process in all they did. Everything was done and set in motion from the government house. Okorocha broke rules to award contracts directly and in most cases, he even paid directly. Following procurement laws seemed like a Taboo. Little wonder why virtually all the roads they managed to construct are in a mess and the bridges which have not been reinforced are already collapsing.

The family affair became institutionalised that even Okorocha himself even admitted that his wife was in charge of four ministries in the state. This was not only the height of absurdity, it was unprecedented! Okorocha appointed his wife as the chairman of the state’s amnesty programme where she busied herself siphoning funds meant for Imolites. How can we forget how the highly delusional Okorocha created the famous Ministry of Happiness and Purpose Fulfillment which he appointed his sister, Ogechi Ololo as commissioner. Almost every member of the Okorocha dynasty had one portfolio or the other in government, this he did to ensure that the looting was comprehensive and everyone around him had access to the ‘cake’.

Before making his way to the Government House of Imo State, Okorocha had been able to tactfully mobilise the media to help him build a reputation as a philanthropist, a wealthy business mogul whose only interest in dropping down from his presidential bid to run for governor was as a result of his desire to save Imo from the shackles of bad governance. Many people would recall how he anchored his campaign on the mantra of ‘Rescue Mission’, it was only a matter of time before decerning minds were able to decipher that Okorocha had actually come to ‘rescue’ himself and his household and not Imo State.

By the time Okorocha was done rescuing his family members and cronies, they left Imo Government House with the Old IBC premises at Orji, WODDI Wellness Center owned by Okorocha’s wife, Nkechi, which was built on the former Imo State Secretariat Annex, a land forcefully acquired from the state by Uche Nwosu when he held sway as Commissioner for Lands; The Reach FM principally owned by Uche Nwosu; Over twenty-five plots of land fraudulently acquired by Uche Nwosu from Imo State upon which El Freeda Foundation was built; Extervia Mega Supermarket opposite Civic Center Estate principally owned by Ogechi Ololo, Okorocha’s sister and the Municipal Plaza owned by Nkechi Okorocha, built on land forcefully acquired from a civil servant of which the matter is still in court. The family also acquired The Twitter Bites Fast Food which is owned by Geraldine Okorocha; the glorious Spibat Estate, most of which land was forcefully taken from Mbieri people; House of Freeda Malls in Abuja, Lagos and Owerri built by Uloma, Uche Nwosu’s wife;
A large poultry farm beside Shoprite owned by Uche Nwosu on lands forcefully acquired using state powers and many more! While the Okorochas have continued to pride themselves as the richest people in Imo State, it is important to ask questions about the sources of income of the likes of Uche Nwosu and his wife Uloma as well as other criminal cronies of Okorocha before Imolites handed over the keys to the treasury of Imo State to them.

Hiding under the wicked guise of privatisation and commercialisation, almost looted Imo State to bankruptcy. Awarding contracts to contractors who are neither registered with the Corporate Affairs Commission nor do they have any website or digital footprint.

The Okorochas looted the state blind to the extent that he even felt that the only way to secure his loots was to install his son-in-law, Nwosu, as his successor. Thankfully, he failed at it despite dealing ruthlessly with the likes of Sir Jude Agbaso (his first deputy governor), Sir Jude Ejiogu, Nick Oparandudu, and Eze Madumere (his second deputy governor) who could thwart his scheming.

Talking about Sir Jude Agbaso, Okorocha dealt with him so ruthlessly that his once blistering political light was shut out without a trace. Okorocha got 25 or the 27 House of Assembly members to impeach him as deputy governor barely two years into their joint tenure accusing him of receiving kickbacks from contractors. It has taken Sir Agbaso almost a decade of painstaking work to clear his name and redeem his image. Okorocha was not only wicked, but he was also callous as well.

Can Okorocha account for the huge funds allocated monthly to the 27 local Government areas in Imo State between May 2011 and May 2019 which were hundreds of Billions of Naira? Can he? After squandering all these funds, he left no development in any of these local governments. No power, no roads, no hospitals, no standard schools, no well-built markets, no bore holes, and no rural electrification, etc in any of these local governments! Talk about men who lack any iota of conscience.

By the time he was leaving as governor on the 29th of May, erosion had eaten up a bulk of the major intrastate roads he managed to construct. Things were so bad that the major city centres could literally pass for rivers whenever there is a heavy downpour. To show the kind of person he is, Okorocha had to insult the sensibilities of Ndi Imo by attributing the dilapidation of the ‘China’ roads he built to ‘acidic’ rains. Yes, according to Okorocha, the rains that fell in Imo were different.

Pensioners in Imo State would surely have nightmares whenever they remember Okorocha, with him as governor, getting paid their full pension often seemed like a miracle. Throughout Okorocha’s eight years in the Imo Government House, pension payments ranged from 10 to 30%, and to make matters worse, it was hardly up to date.

By the time he was through with his governance of deception, his signature project in the state, besides the senseless statues he molded, was the hospitals he built in each of the 27 local governments most of which were never completed. Today, the structures lie fallow and have been overgrown by weeds and Imolites are still suffering from lack of proper healthcare.

To sum it all up, Okorocha didn’t even do a proper handover. Despite governing the State at the peak of the oil boom and at a time when Many states were ramping up their Internally Generated Revenues, Okorocha left Imo State in heavy debt with nothing tangible to show for it.

In conclusion, Okorocha can continue with his drama and rhetorics, Karma, they say, is REAL and it’s his turn to get served. His predicament should serve as a lesson to every political office holder who does not remember posterity. Human lives are often like a mist that appears momentarily, everyone must be careful.