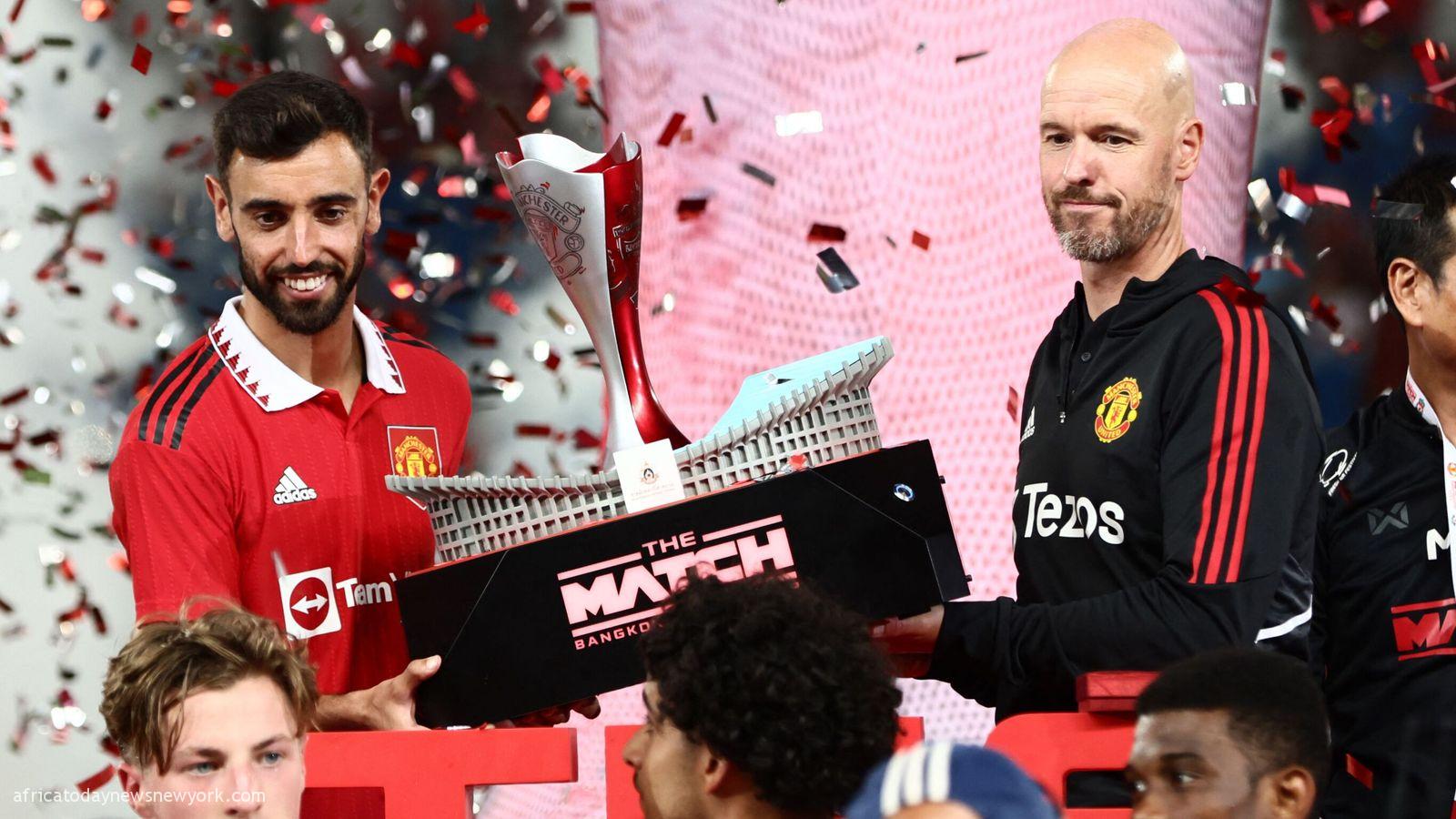 New Machester United manager, Erik Ten Hag stated that he was ‘satisfied’ on Tuesday after he got off to a perfect start as head coach of the Manchester club, however, he insisted he would not be getting carried away after a 4-0 thumping of arch-rivals Liverpool in a preseason friendly in Thailand.

United began quite strongly against an unfamiliar Liverpool line-up, and in less than 40 minutes they were already cruising 3-0 through goals from Jadon Sancho, Fred and Anthony Martial at Bangkok’s Rajamangala Stadium, despite being without the unsettled Cristiano Ronaldo who missed the trip for family reasons.

Both managers made complete substitutions throughout the 90 minutes and Jurgen Klopp’s stronger second-half Liverpool line-up dominated possession before Facundo Pellistri grabbed United’s fourth on the break, 14 minutes from time.

Africa Today News, New York reports that the game gave Ten Hag and his new side a morale-boosting win in their first warm-up outing ahead of the new Premier League campaign beginning next month.

‘I am satisfied today,’ said Dutchman Ten Hag, who took the reins at Old Trafford barely two months ago.

‘It was a team with a great spirit and we know we are just getting started.’

“We made some mistakes in the press, we conceded some chances, but we created a lot.”

Liverpool were unlucky not to get on the scoresheet, hitting the woodwork three times after Sancho opened the scoring in the 12th minute, the England winger slotting home to capitalise on a sloppy clearance from Isaac Mabaya.

Fred’s instinctive, measured chip over the unsighted Liverpool goalkeeper Allison Becker and a crowd of defenders extended the lead in the 30th minute.

And it took just another three minutes for man-of-the-match Martial to make it 3-0 with a fine finish over Allison, after another Liverpool defensive mistake had allowed the striker a clear run at goal.

‘The game came up a bit early for us. But I saw some good things,” said Klopp. “That is just the start of the pre-season.

‘It is all a learning process and we are at the start of it.’

More substitutions after half-time saw Liverpool bring on experience and flair in the shape of Virgil van Dijk at the back and Mohamed Salah up front.

Big-money signing Darwin Nunez, bought for nearly 100 million euros from Benfica, played the last half an hour, the Uruguayan coming close to opening his account for Liverpool in the 70th minute.

Four minutes from time the lively Salah curled a trademark left-footed shot goalbound, only to see it cannon off the post with Nunez blazing the rebound over the bar when it seemed easier to score.

By then Pellistri had slotted home the fourth after a flowing counter-attack.

“We have to work hard to cut out the mistakes but of course we are happy,” said Ten Hag.

“I know we have good players. We have started to build a team and I am happy with the first game,” he added.

‘It will take a lot of time. I have seen a lot of mistakes. Liverpool played three teams, they were not at their strongest. We will not overestimate this result.’

United have come in for criticism from fans for their lack of activity in the transfer market.

Manchester will now head to Australia for more preseason matches, while Liverpool will face Crystal Palace in Singapore on Friday.