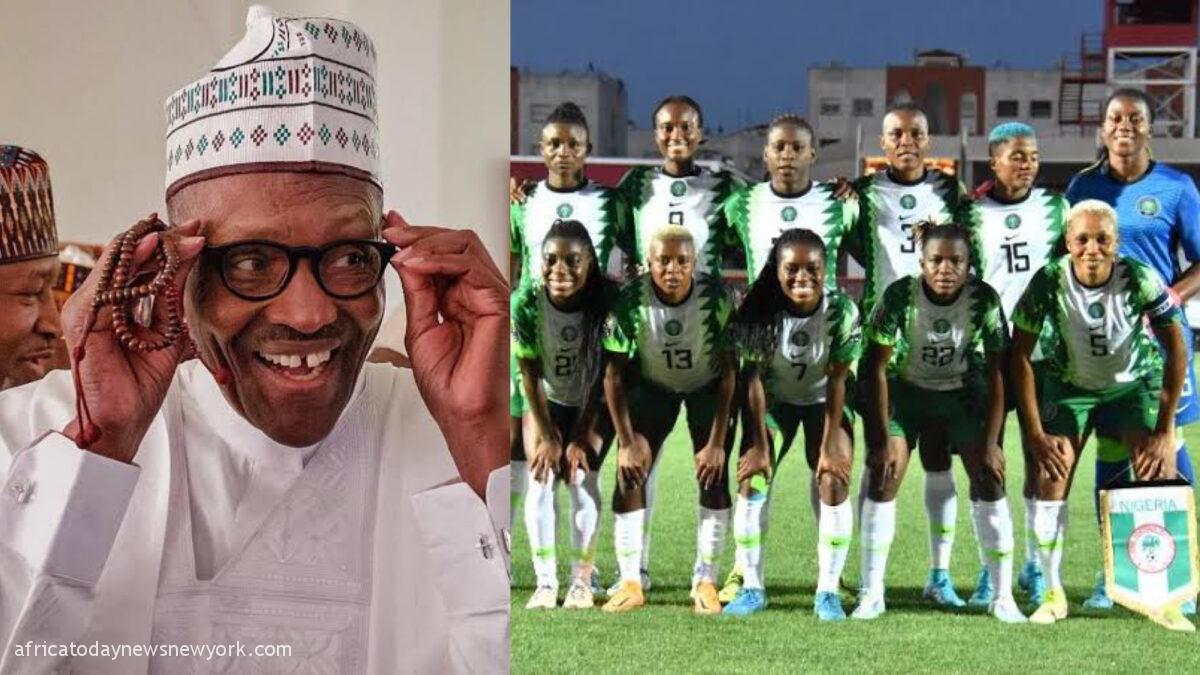 The Nigerian President, Muhammadu Buhari has finally reacted to the victory of Nigeria’s Female Football team, the Super Falcons, while expressing joyous sentiments over their qualifying for the Women’s World Cup in Australia and New Zealand in 2023.

The team had amazingly defeated their opponents in the quarter-final victory at the ongoing Women’s Africa Cup of Nations (WAFCON) in Morocco to launch them into qualifications for next year’s tournament.

A statement from Femi Adesina, Buhari’s media aide noted that the Super Falcons, the record nine-time tile holder and defending champions of WAFCON, triumphed 1-0 over Cameroon on Thursday night.

‘The President lauds the spirited performance of the team in the tournament and for maintaining its dominant posture as undisputed champions of the round-leather game and most successful international women’s football team in the continent.’

‘Having won the tournament twice in 2016 and 2018, under this administration, the President assures the girls and their handlers that the whole nation is strongly standing with them and will continue to cheer them on until the final whistle in Morocco.’

The President also prayed that the Super Falcons, who have produced some of the greatest African players in the history of the women’s game, will certainly surpass their achievement in the last Women’s World Cup in 2019, where they advanced to the Round of 16, for the first time in 15 years.

He concluded by saying he looks forward to the next generation of upcoming stars, who through hard work, discipline, resilience and determination, will one day win the World Cup for Nigeria.

In another report, the Nigerian President, Muhammadu Buhari has on Thursday also sent a belated message to the family of Oluwole Isaac Adetiran who is the composer of NYSC’s national anthem, 69 days after his passing.

Venerable Adetiran who was an accomplished musicologist, had kicked the bucket on the 6th of May, 2022 at the age of 75.

He composed the NYSC anthem, “Youths Obey the Clarion Call,” in 1984 while serving as a Corps member at the Polytechnic of Ibadan, Oyo State, Nigeria.

However, Buhari, in a statement issued by his spokesman, Femi Adesina on Thursday condoled with the Adetiran family, their friends and associates on the passage of an accomplished musicologist.

The President urged the family to take solace in the quality of life lived by the departed, having left his footprints on the sands of time as composer of the NYSC Anthem, sung round the country, and inspiring innumerable youths. Buhari had also prayed to God to rest the soul of the former Head, Department of Music, The Polytechnic, Ibadan; Director of Music, Celestial Church of Christ Worldwide, and holder of the Member of the Order of the Niger (MON) National Award.