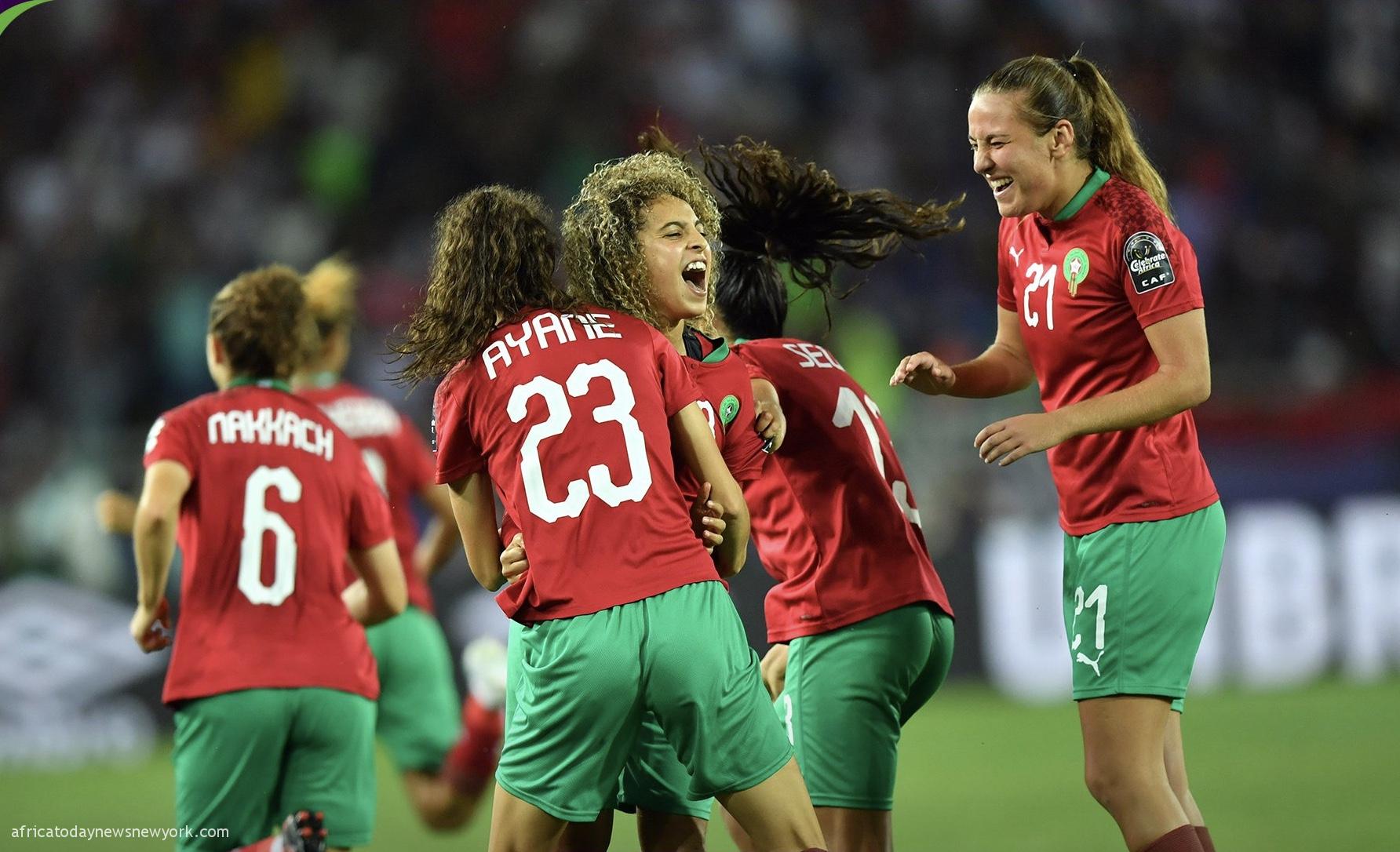 Nigeria’s Super Falcons on Monday night lost their bid to advance to the final of the 2022 Women’s Africa Cup of Nations (WAFCON) in Rabat after they lost 5-4 in penalty shootouts to Morocco.

Earlier in the game, the gallant Nigerian ladies were reduced to nine players after both Halimat Ayinde and Rasheedat Ajibade were sent off for dangerous play deep into the second half.

However, the Moroccans despite having home support from the full capacity stadium, could not defeat Falcons until top striker, Ifeoma Onumonu missed her penalty kick in the shootouts. Atlas Lionesses goalkeeper, Khadija Er-Rmici, denied Onumonu in the shootouts. Rita Chikwelu, Regina Otu, Ashleigh Plumptre and Gift Monday all converted their own kicks.

Morocco took the game to the nine-time African champions from the onset, but the Super Falcons somehow weathered the storm and even began to threaten the goal of their opponents.

Super Falcons however got the lead on 62 minutes in fairly comical circumstances. Rasheedat Ajibade’s cross was headed goalwards by Onumonu but the ball rebounded off the post. Uchenna Kanu looked set to pounce on the loose ball, but as Morocco defender Hanane Aït El Haj tried to clear the ball, she succeeded only in kicking it into the face of teammate Yasmin Mrabet and the ball ended up in the back of the net.

That Nigerian lead lasted only four minutes before the home side hit back to send the crowd into delirious celebrations.

Ayane broke down the right-hand side and when her low cross was not collected cleanly by Nigerian goalkeeper Chiamaka Nnadozie, Sanaâ Mssoudy turned home the loose ball.

Thereafter, with pressure of two players down now having telling effects of the Falcons, they had to resort to defending for the remaining minutes of the game until the shootouts.

The Falcons will battle Zambia who lost in the other semi final to South Africa in the third place match on Sunday.

The Banyana Banyana  booked their place in the WAFCON final via a contentious injury-time penalty against Zambia.

After a lengthy Video Assistant Referee (VAR) review, centre referee Lidya Tafesse, pointed to the spot for a penalty. Linda Motlhalo kept her cool to convert in the 94th minute kick and send the four-time WAFCON runners up into Sunday’s final to face host Morocco.

In a match of few clear chances in Casablanca, Zambia goalkeeper, Catherine Musonda, made a fine save to deny Hildah Magaia late on after Grace Chanda had shot narrowly wide at the other end.