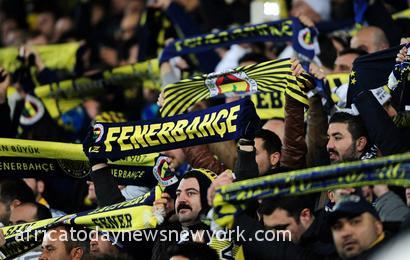 While reacting to the massive backlash on the Football club and some of their supporters, the Fenerbahce’s club president has on Saturday insisted that they would not be apologising for anything after their fans had been heard chanting Vladimir Putin’s name during a match against Dynamo Kyiv.

Images which had been posted on social media showed a section of Fenerbahce’s packed stadium singing the Russian president’s name in response to Dynamo’s first goal against the Istanbul side in a Champions League qualifying match on Wednesday.

Ukraine’s envoy to Turkey expressed “sadness” over the chants and Fenerbahce initially said their fans’ behaviour did “not represent the stance and values of our club”.

But the club’s boss Ali Koc hit out at Ukrainian officials.

“We’re not going to apologise to Ukraine,” he said. “It’s up to the Ukrainian ambassador and the foreign minister’s spokesperson to apologise to us, after their inappropriate remarks.

“I think it was an inappropriate and unnecessary chant, far from how we view ourselves as a club. But what can we do? Shut their mouths?”

The Fenerbahce fans sang the name of Putin after Vitaliy Buyalskyi’s goal for Dynamo in the Ukrainians’ 2-1 extra-time victory, which dumped the Turkish side out of the Champions League.

“Our armed forces beat Putin 2-1 on Turkish soil. We recommend Turkish fans to be on the winning side,” tweeted the spokesperson for Ukraine’s foreign ministry after the game.

On Thursday, UEFA announced it was opening an investigation into “alleged misbehaviour of Fenerbahce supporters”.