Putin Praises Erdogan For Role In Shipment Of Ukraine Grain 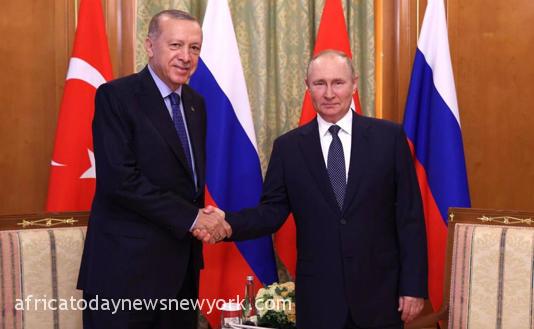 The Russian President Vladimir Putin has openly lauded his Turkish counterpart, Recep Tayyip Erdogan for his role as a mediator in the shipment of some of the grain shipments from Ukraine during a meeting in the Russian city of Sochi on Friday.

“With his direct involvement and through the mediation of the UN Secretariat, the problem related to the supply of Ukrainian grain from the Black Sea ports has been solved. Supplies have already begun,” Putin commented, TASS news agency reported.

In this regard, he noted that “for many countries, especially for developing countries, which are on the verge of big problems with food and fertilizer supplies”, it is vital to have an “interrupted supply”.

For his part, Erdogan pointed out that “the eyes of the world are on Sochi” and that the statements made in the framework of this meeting “will serve as an answer to the doubts that the international community may have” about the current context with Russia, as reported by the Anatolia news agency.

Likewise, the Russian president has addressed Erdogan to convey to him that the Turkish Stream gas pipeline, unlike all other hydrocarbon structures in Europe, “works correctly” and “without failures”.

These statements come after Gazprom was forced to drastically reduce gas deliveries to Germany due to the absence of a turbine sent to Canada for repair, which has now returned to the European country, where it is stored before being transported to Russia for installation.

In another report, the President of Russia, Vladimir Putin has warned of possible ‘catastrophic consequences’ of Western sanctions on the global energy market stressing that the moves by the West will only sink them further.

‘Sanctions restrictions on Russia will bring far bigger losses for the countries that impose the’ Putin told a televised government meeting in an argument he is fond of using.

‘Continuing to use the politics of sanctions can lead to even more serious, without exaggeration — catastrophic — consequences on the world energy market.’