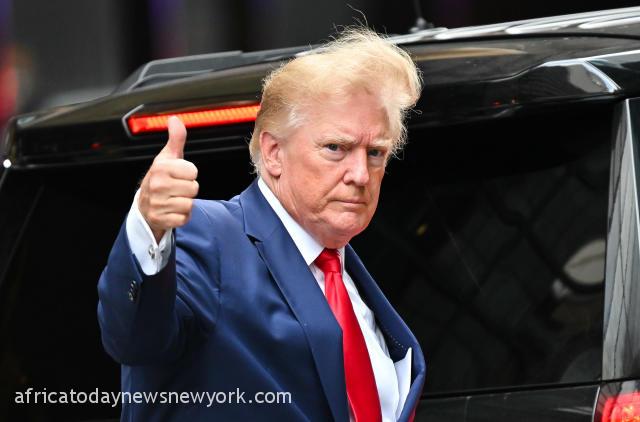 Former US President, Donald Trump yesterday left a deposition in Manhattan after about six hours of questioning under oath over alleged fraud at his family business, having earlier vowed he would invoke his constitutional right to remain silent.

The former president nodded at a small group of spectators escorted by Secret Service and law enforcement as his motorcade sped away.

Earlier, during a deposition at the New York attorney general’s office, Trump said he had “no choice” but to invoke the Fifth Amendment of the US Constitution, which permits people to remain silent during questioning in order to guard against self-incrimination.

In a statement apparently issued after the deposition began, Trump said, ‘I declined to answer the questions under the rights and privileges afforded to every citizen under the United States Constitution,’ adding he took the advice from his legal counsel.

‘I once asked, ‘If you’re innocent, why are you taking the Fifth Amendment?’ Now I know the answer to that question,” he continued.

‘When your family, your company, and all the people in your orbit have become the targets of an unfounded, politically motivated Witch Hunt supported by lawyers, prosecutors, and the Fake News Media, you have no choice.’

The deposition follows an extraordinary Federal Bureau of Investigation search earlier this week on Trump’s Mar-a-Lago residence in Florida, signalling an escalation of legal probes into the 45th president.

He arrived early Wednesday in a convoy of cars guarded by the Secret Service at the offices of New York Attorney General Letitia James, whose investigation is one of several active probes into the brash billionaire’s business practices and other actions.

The FBI and Department of Justice officials were accused of abusing their “amazing power” by the former mayor of New York City.

‘The FBI and DOJ leadership has abused the awesome power of law enforcement as if the U.S. has no constitution and is a fascist police state’, Giuliani tweeted.

The 78-year-old further accused the officials of a “cover-up” of supposed crimes linked to President Joe Biden.