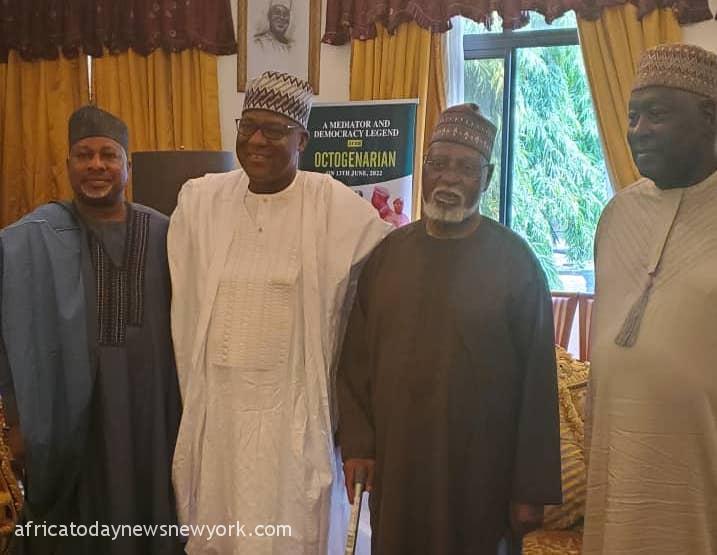 Immediate past Secretary to the Government of the Federation, Babachir Lawal, and former Speaker of the House of Representatives, Yakubu Dogara yesterday held a meeting with the former military president, General Ibrahim Badamasi Babangida, and former Head of State, General Abdusalami Abubakar in Minna, Niger State.

The duo who were accompanied by the former deputy governor of Kogi State, Simon Achuba held separate meetings with the two former military leaders yesterday.

Africa Today News, New York gathered that the meeting was in continuation of their ongoing consultation with key national and political leaders on their rejection of the Muslim-Muslim presidential and vice presidential ticket of the All Progress Congress (APC).

Though sources close to the politicians said they were in Minna to felicitate with General IBB on the occasion of his 81st birthday anniversary, it was gathered that it also served as a forum to consult on the controversial APC Muslims-Muslim ticket.

Inside sources who spoke to newsmen disclsoed that Babachir, Dogara, and other northern Christian leaders in the APC were consulting before taking a decision on which of the presidential candidates to adopt and support ahead of the 2023 general elections.

The choice is now between Atiku Abubakar of the Peoples Democratic Party (PDP), Rabiu Musa Kwankwaso of the New Nigeria People’s Party (NNPP), and Peter Obi of the Labour Party (LP).

Dogara and Babachir recently convened a submit of APC Northern Christian Forum in Abuja where representatives and delegates from the 19 northern states and the Federal Capital Territory vehemently rejected the Muslim-Muslim ticket.

Meanwhile, ahead of Nigeria’s next presidential poll, Ibrahim Masari who happens to be the former placeholder to Bola Ahmed Tinubu, the All Progressives Congress (APC), presidential candidate, has disclosed that Rivers State Governor, Nyesom Wike was working for the party.

Speaking to told BBC Hausa Service on Wednesday, Masari asserted that Wike would work for Tinubu’s emergence as president in next year’s election.