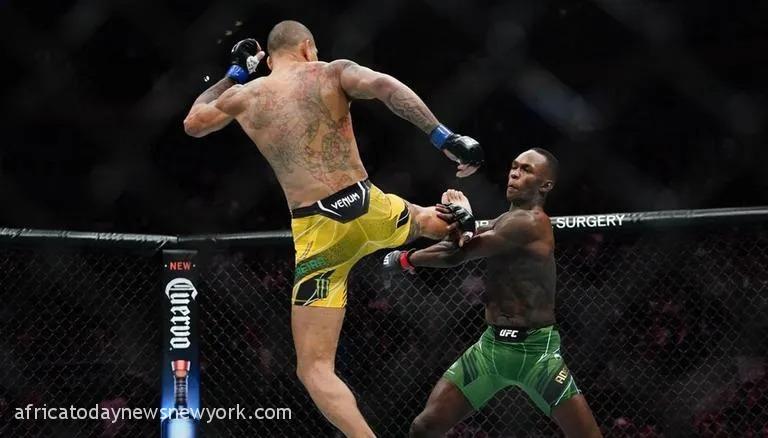 In a flash battle, Alex Pereira has stopped Israel Adesanya in the fifth round of their cracker bout to become the new UFC middleweight champion.

He had doled out a flurry of massive punches from Pereira which had also included an uppercut which had handed Adesanya his first defeat in the category and also his third against the Brazilian after consecutive losses in 2016 and 2017.

Pereira would also become the new undisputed champion with just five fights in the UFC.

A visibly shaken, hurt and wobbly Adesanya could not keep up as the referee brought it to an end before the buzzer.

Adesanya had dominated in the opening rounds, unsettling in opponent in the third with a take down, but he had found it difficult to hold his own in the final round. The ‘Last Stylebender’ was ahead 3-1 heading into the fifth round and all he had to do was keep his challenger at bay.

Pereira’s instruction from his corner was very clear, “knock him out if you want to win this” and that was exactly what he did. Adesanya managed to keep him in check until the final seconds when he exposed himself to audible blows that gave him jelly legs before the referee stepped in to end it.

In another report, it was a painful evening for Nigeria International, Alex Iwobi after he watched as the shirt he threw to Everton fans after their 3-0 defeat to Bournemouth was thrown straight back to him by angry supporters.

Africa Today News, New York reports that Iwobi was among the few Everton players who managed to approach the away end, throwing his shirt into the crowd only to see it less than two minutes later.

Everton fans could not hold their anger and vented it on Frank Lampard and his men after watching them fall 3-0 to Bournemouth.

Meanwhile, Police and match stewards were on ground to calm the situation following a heated exchange involving the Toffees fans and club captain Seamus Coleman.