Reactions As Road Is Named After Buhari In Niger Republic 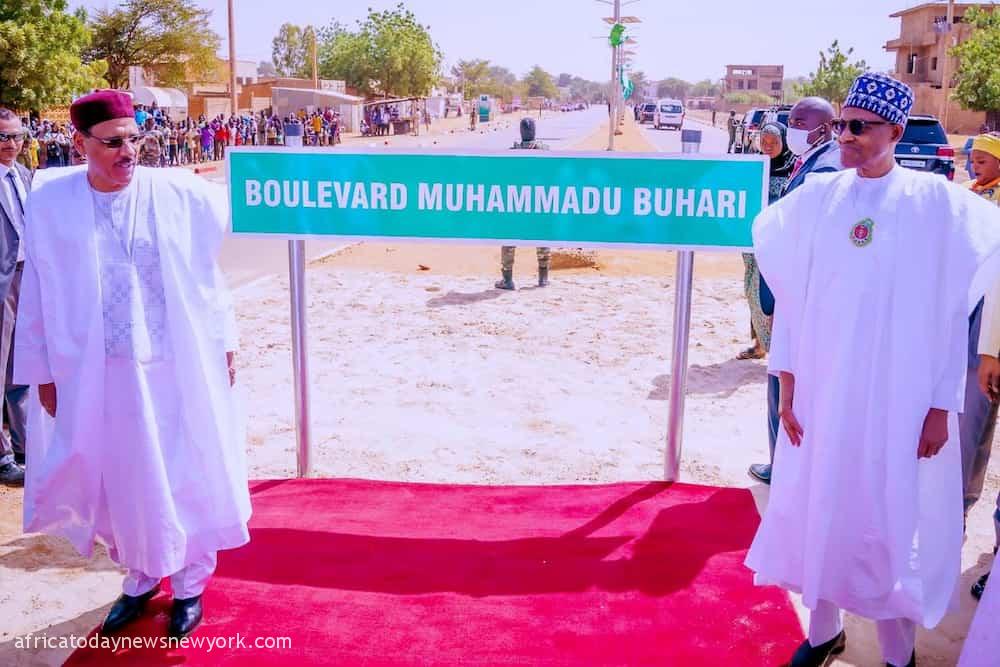 The President of Nigeria, Muhammadu Buhari has made a case for greater cooperation among West African nations to help boost ongoing efforts to combat escalating volatilities and threats.

The President made this call after inaugurating a 3.8km length and 160m wide Boulevard named after him by the Government of Niger Republic.

Buhari maintained that the ever-evolving nature of the threats underlines the need for enhanced coordination.

The Nigerian leader pointed out incremental progress has been made in the fight against terrorism and other trans-border crimes.

He also warned of renewed efforts by violent extremist groups to expand their operations and footholds in West Africa.

Buhari reiterated Nigeria’s commitment to bilateral, as well as multilateral initiatives with Niger, Chad, and Cameroon.

Commenting on the French version of his biography, he expressed hope that it would inspire emerging leaders to believe in ‘hard work, integrity, and patriotism’.

Meanwhile, the presidency on Thursday said the naming of a road after President Muhammadu Buhari in Niger Republic was an indication of the tremendous respect that Nigeria’s neighbours have towards him.

Senior Special Assistant on Media and Publicity to the President, Malam Garba Shehu disclosed this in the Nigerien capital, Niamey, shortly after Buhari inaugurated a major road named after him.

Shehu said the President of Niger Republic, Mohammed Bazoun, accompanied by the Mayor of Niamey and other officials, took Buhari on a tour of the 3.8 kilometer boulevard inaugurated in line with the country’s constitutional provisions.

The presidential aide quoted Buhari as expressing satisfaction with the existing bilateral relationship between Nigeria and its neigbours.

Buhari expressed the belief that such ties had helped tremendously, especially in the areas of tackling border insecurity, illegal arms import, and smuggling.