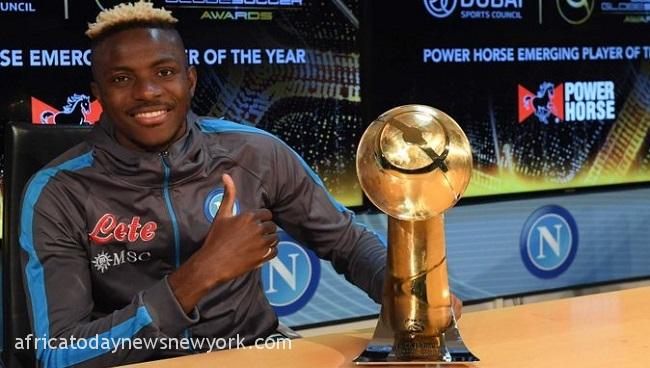 Africa Today News, New York reports that the former Lille of France forward defeated Gavi and Valverde to scoop the prize in a ceremony held at the Madinat Jumeirah in Dubai in November 2022.

In a post on his Twitter handle on Wednesday, Osimhen said he just received the trophy which he won two months ago and displayed it in a photo accompanying his post.

‘Just Receive The @Globe_Soccer Award For The Power Horse Emerging Player Of The Year, Thank You For The Recognition, And To Those That Have Been Supporting Me Through The Years, I Appreciate Y’all.GOD Is The Greatest,’ Osimhen wrote.

In another report, Argentina coach Lionel Scaloni has revealed he believes Lionel Messi can play at the 2026 World Cup.

Messi, 35, led Argentina to glory in Qatar last month and repeatedly said throughout the tournament that it was going to be his last World Cup.

‘I think Messi can make it to the next World Cup,’ Scaloni told Spanish radio Calvia FM. ‘It will depend a lot on what he wants and what happens over time, that he feels good. The doors will always be open. He is happy on the pitch, and for us [it] would be good.’

The Paris Saint-Germain forward did say he would continue to play for the Albiceleste in the near future after finally adding a World Cup winners’ medal to his illustrious resume.

‘I really enjoy being in the national team and being a part of this group,’ Messi said after the World Cup final. ‘I want to continue experiencing more games [with the national team] as world champion.’

Messi was close to winning the 2014 World Cup in Brazil, but Argentina lost 1-0 to Germany in the final.