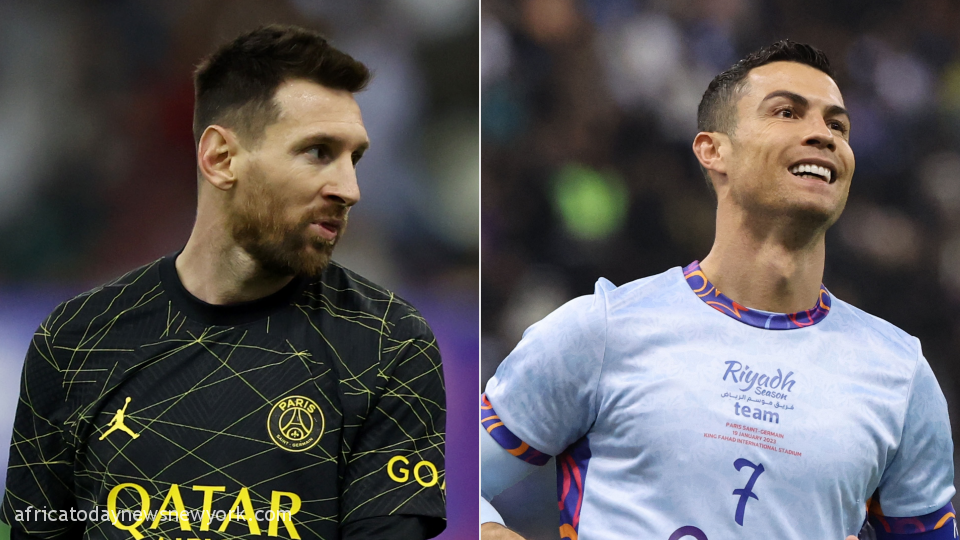 Portuguese captain, Cristiano Ronaldo, and Lionel Messi last night were both on the scoresheet as Paris Saint-Germain defeated the Riyadh Season Team 5-4.

Africa Today News, New York reports that Ronaldo was on the scoresheet twice at the King Fahd International Stadium.

It was his first game after he joined Saudi Pro League side Al Nassr from Manchester United.

Messi got the first goal before Ronaldo equalised from the penalty spot.

Marquinhos put PSG 2-1 up, but Ronaldo levelled again, firing in his rebound.

Read Also: Why I Snubbed Other Clubs In Europe For Al-Nassr – Ronaldo

Both Ronaldo and Messi were taken off after 60 minutes.

Sergio Ramos put PSG 3-2 up, before Jang Hyun-Soo equalised and Kylian Mbappe scored a penalty to make it 4-3.

Hugo Ekitike came off the bench to the net for the Ligue 1 champions and Anderson Talisca grabbed a late consolation as the match finished 5-4.

Recall that Ronaldo had a few weeks ago asserted that his work in Europe is done, but he had ‘many opportunities’ to sign for top European clubs and from other continents.

However, he opted for Al-Nassr as a challenge ‘to develop the football and all the amazing parts’ of the country.

Africa Today News, New York reports that the Portugal captain had last Friday joined the Saudi Arabian side as a free agent after leaving Manchester United on mutual consent, following a controversial interview where he criticized the club.

Ronaldo is reportedly set to receive the biggest football salary in history a huge deal estimated at 200 million euros ($211m) in a deal that runs until 2025.

‘My work in Europe is done, I played at the best clubs in the world… and I won everything. I’m happy, proud to join Al Nassr’ said Ronaldo who has won a plethora of titles in Europe including a record 5 UEFA Champions League titles, and is its all-time leading goal-scorer with 140 goals.

He added, ‘I had many offers in Europe, many in Brazil, Australia, the US, even in Portugal.’
‘I gave my word to this club; only to Al Nassr.”

The five-time Ballon d’Or winner was greeted with applause and shouts of his trademark ‘Siu’ celebration by fans and players at Al Nassr’s Mrsool Park stadium as he spoke during his unveiling ceremony.