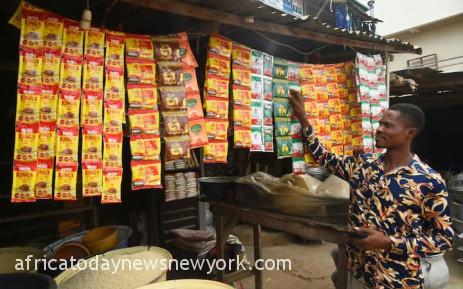 From five grams of normal toothpaste to 10 millilitres of cooking oil, a large number of Nigerians have been struggling with some of the soaring prices of some of the commodities in the country which is why they have reverted to now buying their basic necessities in small quantities which would be packed in tiny plastic bags to be consumed on the same day.

Consumer brands behind this “sachetisation of the economy” see it as a creative and better innovation which would go a long way to allowing consumption for all Nigerians, the majority of whom live on less than $2 a day.

But critics see the development as an economic and ecological aberration, even as Africa’s largest economy struggles with the inflationary fallout from Russia’s war in Ukraine.

In the streets of Lagos, the vibrant economic capital of Africa’s most populous country, small sachets are now part of the decor: they colour its streets, packing the wood and tin shops found on the corner of most streets.  Sitting on a stool, Ibrahim Atahire has been running his small grocery store for 30 years in a busy area of Obalende, a popular district of the megalopolis.

“At my place, you can buy everything in small quantities,” said the 55-year-old trader with a streaked grey beard.

On its stand, everything is sold in sachets: coffee or powdered milk for just one cup, a few grams of cereal, toothpaste for one brushing, razors packaged and sold individually, washing powder and fabric softener for a single wash.

Even mosquito cream to relieve bites is sold in a package smaller than the palm of a hand.

Africa’s largest economy, Nigeria, is struggling with the inflationary pressure that results from Russia’s war in Ukraine. Faced with soaring costs many Nigerians are now buying basic products in small quantities to be consumed on the same day.

“not everybody has money to buy in bulk. Like this baby now, if he wants to drink ‘Pure Water’ (brand of water sachet sold in Nigeria that costs 250 nairas or $0.60, ed.) but you cannot have money to buy in bulk, you can only buy one and drink. Because things are too expensive”, complained Nigerian vendor Babalola Rose.

Many Nigerians survive on less that two US dollars a day.

“Before, if someone wanted to buy like groundnut oil, they would buy a bottle but now there is no money and things are very expensive. Before the sachet oil was cheaper than the other one, now people prefer to buy the sachets because they don’t have money to buy a lot of quantity”, said another vendor, Adjene Dukas.

Critics see the new development as an economic and ecological aberration.

The increased use of plastic sachets aggravates the environmental situation.

“The impact of the sachet economy means that we have more single-use plastics being put into the environment at a very very alarming rate causing a lot of concerns for the ocean, for people and the planet” alerted Oluwaseyi Moejoh, a Nigerian environmental activist.