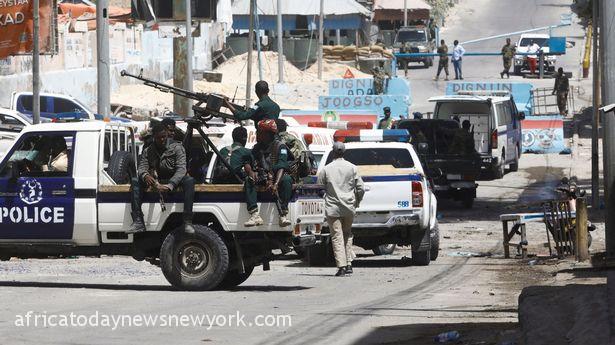 It has been reported that over ten civilians have been gunned down in a sudden Islamist militant attack which had taken place at a popular hotel in the Somali capital, as some of the security forces on ground had heavily battled the gunmen who were barricaded inside many hours after the siege began.

Some of the fighters from the Al-Qaeda-linked Al-Shabaab terrorist group had stormed the Hayat Hotel in Mogadishu on Friday evening while embroiling the place in a hail of gunfire and bomb blasts, trapping scores of people although officials said many including children have been rescued.

Some of the sporadic gunfire and the loud explosions that ensued could still be heard into early Saturday afternoon, withsome reports of a fierce firefight in the hotel, although details remain difficult to verify in the chaos.

It is the biggest attack in Mogadishu since Somalia’s new president, Hassan Sheikh Mohamud, was elected in May after many months of political instability.

“The security forces continued to neutralise terrorists who have been cordoned inside a room in the hotel building. Most of the people were rescued but at least eight civilians were confirmed dead so far,” security commander Mohamed Abdikadir told AFP.

“The security forces rescued dozens of civilians including children who were trapped in the building.”

Al-Shabaab, which has been waging a deadly insurgency against Somalia’s fragile central government for 15 years, claimed responsibility for the attack and said it was still in control of the hotel Saturday.

Dozens of people have been gathering outside the four-storey hotel to discover the fate of loved ones.

“We have been looking for a relative of mine who was trapped inside the hotel, she was confirmed dead together with six other people, two of them I know,” said an anxious Muudey Ali.

There has been no official comment from the government about the attack.