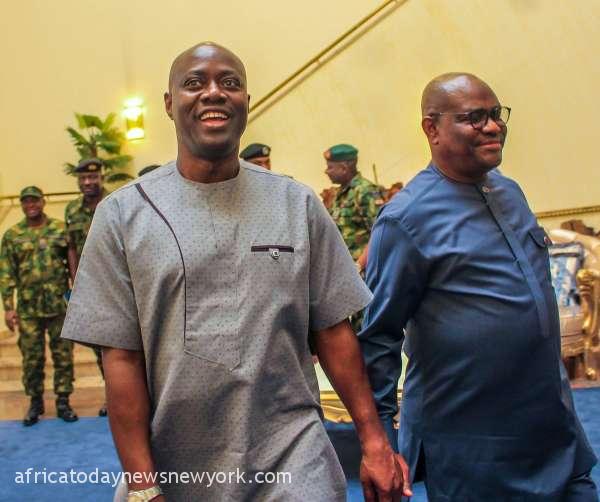 The Oyo State chapter of the All Progressives Congress (APC) has flayed Governor Seyi Makinde accusing him of poor performance ever since he assumed office in May 2019, telling him to desist from being a sycophant to Governor Wike.

The party submitted that Makinde had not performed well despite that the state is collecting allocations bigger than many states.

The Oyo APC Publicity Secretary, Olawale Shadare, disclosed in a statement on Sunday, that the governor had completely stopped governance in his bid to be relevant in national politics.

Makinde, the opposition party said, had been following his Rivers State counterpart, Nyesom Wike, about like his aide and thereby desecrating the status of Oyo as a pacesetter state.

He called on voters in the state to be wary of fake and ‘deceitful record of achievements’ Makinde and his team had allegedly packaged with a view to using it as campaign documents and thus mislead the public including the hapless electorate.

The statement read, ‘Gov. Makinde’s quest for another term in office is an affront targeted at the good people of the Pacesetter state who have gained little or nothing from his administration in the last 40 months.

‘The governor had left no one in doubt of what his priority would be when he abandoned preparation of governance blueprint for inauguration day rehearsal as well as euphoria of occupying the governor seat. He would later nail it with his uninspiring inaugural address which got many people disappointed as he failed to convince the world that he was prepared to raise the bar from the legacies of the Sage- Chief Obafemi Awolowo, Chief Bola Ige, Lam Adesina, Abiola Ajimobi and others.

‘Forty months after, the full reality has dawned on the people that the PDP administration of Gov. Seyi Makinde has nothing to offer except window dressing, grandstanding, and misappropriation of scarce resources.

‘We now have an administration which has brought governance to a ridiculous level as against the traditional sterling performances which almost all the chief occupants of Agodi Government House have recorded in their respective times.

‘Today, we have a government which prefers empowerment of miscreants to creation of enabling environment for investors to engage our teeming unemployed youths. We have a government which does not only celebrate cosmetic projects done at an inflated cost but also mobilizes hirelings and praise singers for orchestration. As a matter of fact, Gov. Makinde’s administration would occupy a good space in the history of bad governance and clueless government in the whole world.

‘States such as Ebonyi, Borno, Osun, Gombe, and Kaduna earn far less in terms of federal allocations and internally generated revenue but the value which their respective governors have added in the last three years is a pointer to the fact that Oyo state has been on a downward slope since June 2019. For the avoidance of doubt, we challenge Gov. Makinde to name any of the key sectors of the economy where he has performed exceptionally since he came into office.

‘Interestingly, the song on the lips of conscious and discerning indigenes and residents of Oyo state is that Gov. Makinde should endeavour to stop the further desecration of the Pacesetter status of the state. Even if he cannot pick any good thing from Gov. Wike who is obviously his Godfather, he should desist from acting like an aide to his Rivers state colleague henceforth.

‘We would also like to put it on record that Gov Makinde’s quest to be relevant at the level of national politics is ill-advised and a clear indication that he does not have any serious thing to do with governance again in the state.’

Africa Today News, New York reports that Makinde has continued to pitch his tenth with Governor Wike amidst the ongoing PDP crisis.