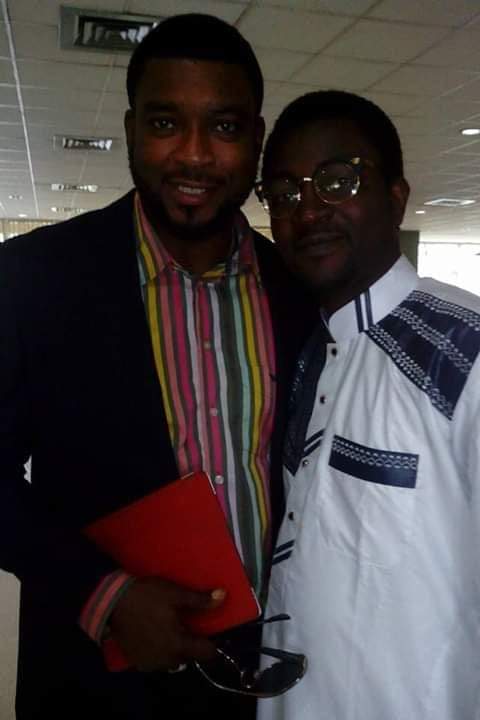 The Nigeria’s movie industry popularly christened Nollywood amidst the challenges over the years, has emerged to be the leading film industry in Africa where invariably, it has produced extraordinary craftsmanship in filmmaking right from script to screen.

The industry, in deed has evolved but it will certainly be mere flattering to posit that Nollywood has eventually arrived like Hollywood.

In the areas of  production technicality, there’s obviously need for improvement, and that basically explains the reason why the likes of Oyebanji James, Tarila Thompson, Izu Ojukwu  and few others are taking the bold step to absolutely redefine the motion picture industry to favourably compete with Hollywood.

Polity & People speaking with Oyebanji James, one of the most phenomenal and bankable film makers in Nollywood while on set on Glover Road, Ikoyi. A plush area of Lagos, Nigeria.

Oyebanji James, fondly addressed in the industry by admirers, friends, and colleagues in the industry as Able D ( Able Director) due to his dexterity and creativity in filmmaking, possess an undying love for motion picture and theatre practice. And all these, led him from being an actor to a director, and a college lecturer in film directing and cinematography at the first Federal Government of Nigeria approved private film college, Pefti Film Institute, Lagos.

The multi talented auteur who has numerous blockbuster flicks to his credit has just finished coordinating the production of, one of the biggest movies in Africa, directed by the ingenious Tarila Thompson, in this no-holds barred interview explained to Polity &People, the current project he is working on, the challenges that bedevil the industry, and the possible solution.

P & P : You have done quite some works that stand you out as a film director and as such you need little or no introduction in Nollywood but for the purpose of this interview, we would like you to formally introduce yourself?

Oyebanji : I am Omoba Oyebanji Ademuyiwa James. A graduate of Theatre Arts from the University of Uyo, Akwa Ibom state and a certificate holder in Cinematography and Documentary Filmmaking from National Film Institute, Jos, Nigeria. I am the pioneer chairman of the Actors Guild of Nigeria , Oyo state chapter.

P & P : When did you get into the industry professionally?

Oyebanji : I got into the industry vividly in 1997, though as an actor. I played the lead role in a television drama orchestrated by NTA channel 12, Uyo directed by Preye Nathan Okoko (a staff of NTA).

But in the course of the shoot then, I was fascinated by the finesse and the process of the craft. Within me then, I knew I had found a new art form – directing. In my quest of knowing this newly found love of mine, directing, I got hooked up with Ndubuisi Okoh (Late now). Not been satisfied with Enugu affinity, I proceeded to National Film Institute , Jos, a film institute created by the Federal government of Nigeria through Nigerian Film Corporation (NFC).

There in the school, I was trained by Nigeria’s finest, Hyginus Ekwuazi, U.S.A Galadima, Onyero Ngbejume and Professor Langsfield (the then vice president of CILECT). I was exposed to profound film making ethics with theories and practicals. It was after this training that I began a new journey in Film making (directing) and since then about two decades ago I have been either been producing or directing. At times simultaneously.

P & P : Which of your movies would you describe as the most challenging?

My first movie was the most challenging. We were taught in film school that a film maker is a social reformist. It simply means that a film maker is an “evangelist” a kind of preacher who sees what is bad in the society and talks about it or rather make the people know what they are ignorant of. So, this became my watch-word that as a film maker, I must rid my society of vices that could damage it. What led to my first movie is the issue of homosexuality and Lesbians. It was reported in the 80’s thereabout that AIDS was first noticed amongst homosexuals. With this ugliness, I started tracing the root cause of this unpleasant act in our society and to my greatest surprise, I discovered that the breeding ground for this act are the single sex schools we have in our society.

I swung into action of writing the script with indept research. In the course of making the movie,the actors (playing homosexuals), broke down in tears when I was about shooting the kissing and romantic scene, to them,they can’t just imagine two grown males doing that, they wanted to renege from playing the role at that point but I brought into play my directorial strength by injecting them with one of Stanislavski principles of acting,  “Magic If” and I got them to do it.

After producing and directing the movie, it tore censor board into two, some were for it and others kicked. The then zonal co-ordinator of censor board at Ikoyi, Mr Rotimi Martins under the supremacy of the then DG, Mr Ademola James, said that my movie will be x-rated knowing full well it’s a content for the mature audience. I agreed to it being concious of that fact but the myopism of the other members of the board drowned the film from seeing the light of the day.

It was at that point I indentified the unprofessionalism of some of the members of Nigeria Censor Board. If that film was allowed to see the light of the day, the dangers of homosexuality could have been curbed before the National debate of it 2014/2015.