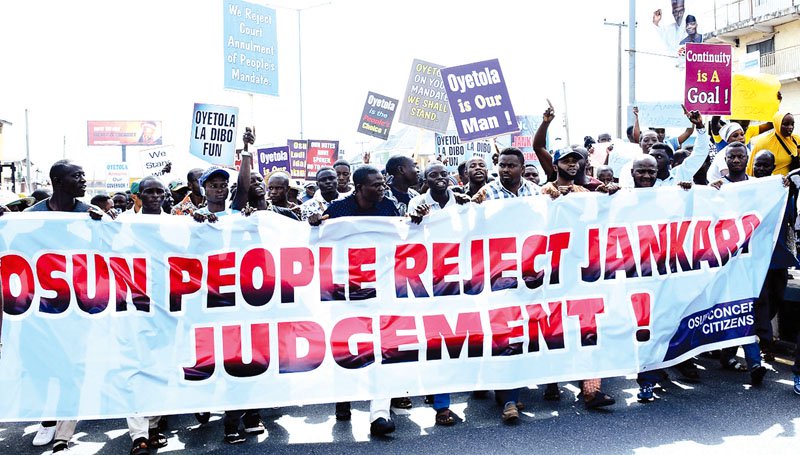 Former Osun State Governor Rauf Aregbesola has described the judgment of the Election Petition Tribunal last Friday, which nullified the election of Governor Gboyega Oyetola as very strange and unknown to law.

Aregbesola, in a statement by his Media Adviser, Mr. Sola Fasure, said the report of the split judgment came to every watcher of political events in the state as a rude shock.

In the statement entitled: “This judgment cannot stand,” the former governor said the people of the state and the government have the highest regards for the judiciary and would keep having high regards for the revered institution.

Aregbesola, however, regretted that the tribunal’s majority judgment was strange to law and common sense.

He said the majority judgment, as delivered by their Lordship, did not support the cause of electoral justice and might constitute the death knell for properly conducted elections.

Aregbesola said the people rejected the majority judgment and believe that it would not stand scrutiny at the appellate court.

The statement noted that the majority judgment, which held that the rerun election conducted in seven polling units on the September 27, 2018, was illegal, null and void, was equally shocking and amounts to a travesty of justice.

He said the government would appeal the judgment, adding that the verdict would be upturned.

The former governor wondered why elections in 17 polling would be annulled when there was no evidence of any act known to render them null and void in an election petition such as over-voting, non-accreditation, ballot box stuffing among others.

Aregbesola contended that concern for substantive justice should have dictated that since the results from the 17 units were duly signed and adjudged by INEC to be authentic, there should not have been any controversy over there validity.

He lamented that the tribunal has effectively disenfranchised the legitimate voters in the 17 polling units and rendered the election undemocratic.

The statement said: “In nullifying the elections in the 17 polling units, the majority judgment predicated it on what is regarded as ‘substantial non-compliance’ with the provisions of the Electoral Act 2010. The said non-compliance, according to the judgment, borders on the failure of INEC’s appointed presiding officers to record accreditation and ballot accounting on the result forms in the 17 polling units.

“There was no evidence of any act known to render election null and void in an election petition such as over voting, non-accreditation, ballot box stuffing etc.

“This much was highlighted in the dissenting judgment of the Chairman of the Tribunal in disagreeing with the majority decision.

“It must be noted that APC and its candidate were not accused of any electoral malfeasance in the 17 polling units. Rather, INEC, a common agent of PDP and APC (and indeed, all the political parties), which neither of the parties has control over was merely accused of not complying with its manual for the election, when the presiding officers appointed for the election failed to make the entries.

“Therefore, the most relevant question one would pose here is: should the tribunal allow APC to suffer as a result of the mistakes or omissions occasioned by the INEC staff? Certainly, no!”

The statement added: “Equally shocking are the reasons advanced by the two justices. They advanced the proposition that elections in the seven polling units were cancelled by the state collation officer. This was not the case. There were no elections in the seven polling units, and if there was any, the onus was on the petitioners. This onus was not discharged in anyway as no results was tendered.

“The state collation officer in compliance with the margin of lead principle rightly reasoned that the outcomes of the elections could not be determined without conducting polls in the affected elections. Hence the commission’s decision to conduct supplementary elections in line with these principles.”

The ex-governor urged APC members, “supporters and lovers of justice, who have been outraged by this verdict, to be calm and unruffled”.

He insisted that the verdict cannot stand.

“As they say in law, you cannot build something on nothing,”Aregbesola said.

A Group of youths under the Osun Concerned Citizens yesterday protested judgment of the Osun Election Petitions Tribunal on the September 22, 2018 state governorship poll.

Last Friday, a three-man tribunal ruled that the People’s Democratic Party’s governorship candidate, Senator Ademola Adeleke, was the winner of the poll.

During the peaceful protest, the youths, in their hundreds, marched round major streets of Osogbo, the state capital, from Ayetoro junction via Old Garage and Okefia to Olaiya area.

The youths, who carried placards with various inscriptions like “Oyetola remain our governor”, “We voted for Governor Oyetola”, “We cannot be intimidated” among others, caused a traffic gridlock for many hours.

Addressing the crowd, the group’s General Secretary, Comrade Yaya Ademola, said the protest was aimed at sensitising the people about issues associated with the governorship election.

Ademola, who noted the lacuna in the tribunal’s ruling, was optimistic that the Court of Appeal would overturn the tribunal judgment.

He said any attempt to distort the majority votes would be  resisted.

But, Governor Gboyega Oyetola, while addressing the protesters, urged the people to keep the peace as they await the final judicial pronouncement on the governorship election.

He said the people, while expressing their views on the tribunal judgment, should exercise caution, adding that he believes in the judicial process.

A statement by his Chief Press Secretary, Mr. Adeniyi Adesina, quoted the governor as saying: “I believe that the judicial process should be allowed to take its course. I have hope that we shall be vindicated and our mandate, which the people freely gave us, will be reaffirmed.

“Let us all be law-abiding as we keep hope alive.”