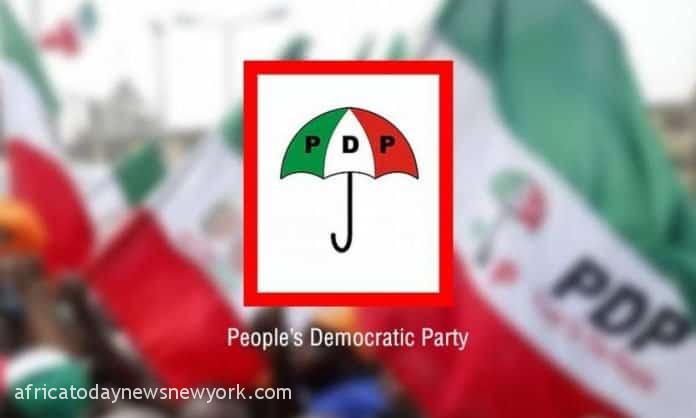 Nigeria’s main opposition party, the Peoples Democratic Party (PDP) has bemoaned the spate of insecurity and the audacity with which terrorists ravage the unchallenged under the administration of the All Progressives Congress (APC) which it described as rudderless.

In a statement by its National Publicity Secretary, Hon Debo Ologunagba, the PDP on Wednesday, asserted that the APC administration led by President Muhammadu Buhari is complicit in most of the attacks.

The party claimed the simultaneous terrorist attacks on the advance convoy of President Buhari in Katsina State as well as the Correctional Facility in Kuje, Abuja underscore the collapse of security command and control structure.

PDP, which described the APC-led government as failed, ineffective and uncoordinated said the terrorist attack in Katsina as well as the ferocious invasion and the freeing of hundreds of terrorists and criminals from the Kuje Correctional Facility further confirm that President Buhari has lost control of the security of the nation.

The party says that the country’s recent surge in terrorism has increased fears of APC collusion and further proves that Nigerians are no longer safe.

Additionally, it claimed that the APC was behind the unabated terrorist assaults in order to delay the 2023 general elections.

‘This is in addition to further reports that soldiers deployed to the precinct of the Kuje Correctional Facility and who had become familiar with the terrain were redeployed 24 hours before the terrorists attacked.

‘The PDP demands that the APC government should come clean on who ordered the reported redeployment of soldiers and who failed to act on the intelligence provided by the DSS.

‘Nigerians can recall the public confession by the Kaduna State Governor, Mallam Nasir el-Rufai at the wake of the bloody Abuja-Kaduna terrorist attack that the APC-led administration knows the whereabouts and the plans of the terrorists ravaging our nation but deliberately refused to act. Nigerians will also recall how APC leaders publicly romanced and paid money to terrorists.’

It expressed concern that President Buhari appears helpless without any decisive and concrete steps taken to stem the tide of terrorist attacks in the country.

The opposition party insisted that the APC government headed by President Buhari has failed in the basic purpose of government which is to secure life and properties of the citizens.

It urged President Buhari to urgently convene an emergency Council of State meeting for a review of the prevailing dangerous security atmosphere in the country.

PDP also called on the National Assembly to immediately summon the Security Chiefs for a thorough investigation on the circumstances resulting in the failure of our security system.