RE: The Greasy Mess At NDDC 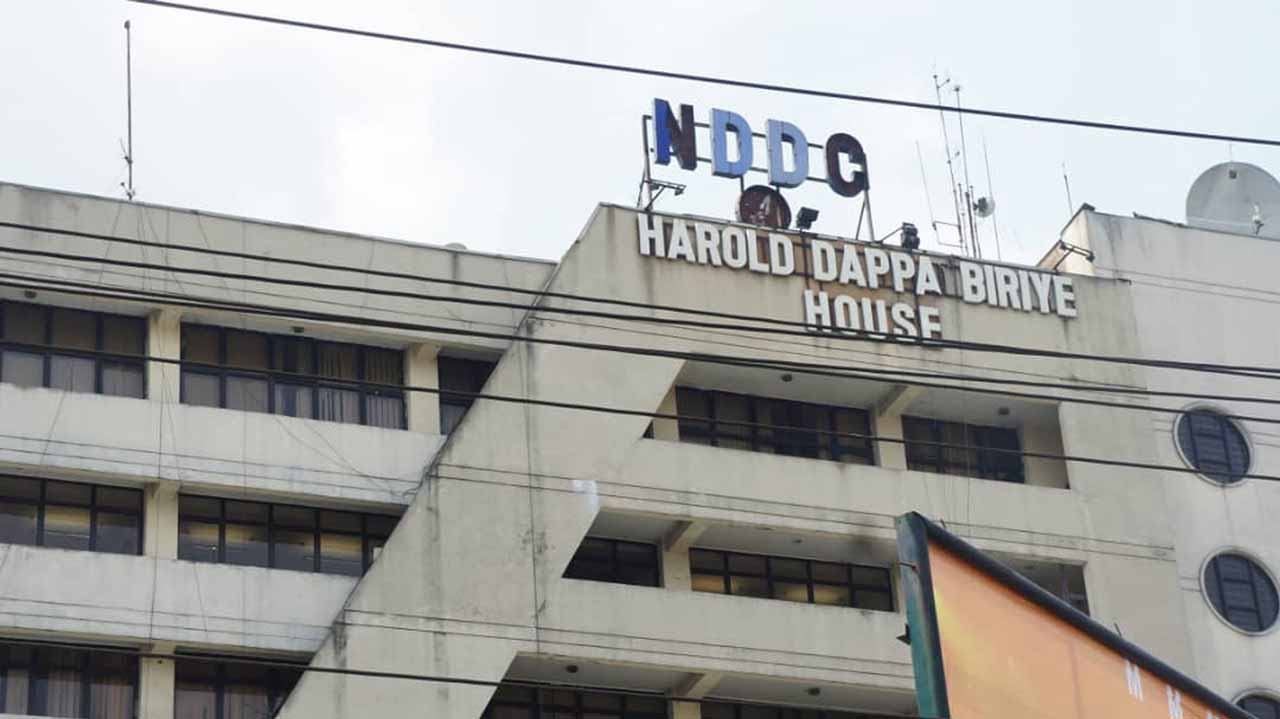 I must confess I had made a decision not to reply to the above titled piece, written by you and published in your POLSCOPE column of Friday, January 10, 2020. This is because I know that Sen. Godswill Akpabio, of which the piece was a hatchet job on, has erudite media personnel that can respond in kind.

But I soon had to change my mind seeing how hard you tried to hide your intent in pretentious content segmentations, prosed primarily to deceive the ‘uneducated’ and make your piece appear unbiased.

Secondly, I feel it imperative to reply, seeing that I have worked with and for Akpabio at close quarters. If people like us who know the man cannot join the fray, when malevolent insinuations become the order of the day, then I wonder who should.

Your piece I must say was not fair on the person of Akpabio, especially seeing that it was mere conjecture and hearsay. Your content segmentation appeared to ordinarily give your write-up better focus from the reader perspective, but the greater point, it appears to me, was to help give you latitude to pursue Akpabio.

We are in a difficult lane as a nation no doubt. The NDDC, one of our country’s much talked about agencies, is in a tough place as it is, so it would not be rocket science to infer intelligently, that people who know that their closets may be revealed would stop at nothing to throw swipes here and there, in a push to divert the popular will.

I would not insult the person of Timi Alaibe because I do not know him, but you have succeeded in putting him in an inordinate place. Isn’t it suspicious, to say the least, that Alaibe, the first Managing Director of the NDDC, is the ‘only saint’ in the history of the NDDC, according to you?

Hear yourself; “Another strand of the problem is in the workforce itself. Many of the personnel have already been stung with the civil service bug. All the malaises and annoying bureaucracy you notice in regular government offices are now practised in NDDC. It was to nip this malady in the bud that the administration of Timi Alaibe had brought in Accenture, to reorganize the service structure. But the idea was soon discarded when Alaibe left. The commission is worse for it today”

“Frequent management changes, it appears, has not helped policy and programme consistency. For instance, the huge effort put into the design and public launch of the Niger Delta master plan in 2007, would have greatly transformed the region if it was not dumped by succeeding administrations after Alaibe left”

According to you everything went bad for the NDDC ‘AFTER ALAIBE LEFT’. ‘Before things started going south….” Alaibe’s NDDC, according to you, had done great things too numerous to mention for the people of the Niger Delta. I pray the forensic audit proves your prince of all knowledge and accountability right.

You could have titled your piece, ” Alaibe The Forgotten Messiah”.

What becomes sad is to publish unfounded allegations against the person of Godswill Akpabio, craftily designed as pious and altruistic intervention.

You appear to malign Akpabio on the matter of award of contract to build the NDDC headquarters to Rodnap Construction Company, a subsidiary of Julius Berger, simply because, according to you, the company ‘was actively involved in the many construction works in Akwa-Ibom State during the governorship of Godswill Akpabio, who is now the minister of Niger Delta affairs’.

You go on to say; “MANY BELIEVE that awarding the contract to Rodnap must have been influenced by then Governor Akpabio, who in turn had supported and projected Nsima Ekere for the governorship contest in Akwa Ibom State” (Capitals mine)

This is conjecture at its best. It is doubtful to say the least, that there exists a school of Journalism anywhere, that the phrase “Many Believe” is accepted as an apt representation of factual, investigative and responsible journalism. What date was the so-called award of contract made? What date did Akpabio join the APC? Wasn’t Nsima Ekere well into his tenure before Akpabio joined the APC? Even if the contract was awarded after Akpabio joined the APC, would it be fair and morally justifiable to malign a man simply because Rodnap construction, a subsidiary of Julius Berger, did work for Akwa ibom State during Akpabio”s tenure?

Julius Berger is easily adjudged as one of the best construction companies in Nigeria. Akpabio always goes for the best. Perhaps that is his crime. Find time to visit Akwa Ibom and you would know why he went for the best. The roads constructed all over Akwa Ibom in his tenure stand without potholes till this day. For your information, Julius Berger is still involved in construction work in Akwa Ibom even today. Would you also malign Udom Emmanuel tomorrow?

Facts they say are sacred and opinions free. Are you factual in saying that the sum of N26billion was paid to Rodnap immediately the IMC (Brain child of Akpabio, according to you) came into being?

And then you go on to ask; “Is it all coincidence or is Akpabio using the influence of his office to advance his personal interest?”

What exactly was your last question above intended to achieve? I ask again; do you know this for a fact? Your question appears a well-heeled journalese that hides the intent of character defamation.

On Dan Abia, you opine that because Akpabio nominated him, then Akpabio should be held responsible for his actions or inactions. This is faulty casual reasoning at its best. In the same breadth I can conclude that if by hook or crook, Mr. Eddy Odivwri plagiarizes tomorrow, then I can very well hold Prince Nduka Obiagbena responsible.

But perhaps the greatest evidence yet of your direct attack on Akpabio is your opinion that “Akpabio’s finger appears to be in every pie of the NDDC, as he had long been involved in the affairs of the commission”. It is note worthy that you say ‘appears’ to be. It simply shows you do not know for a fact what you are putting out or you are very clearly only interested in sowing seeds in the minds of your readers. Akpabio was governor for eight years in Akwa Ibom. It is difficult to see how he would not be involved as all governors of the Niger Delta States are wont to be in the affairs and success drive of the NDDC. This can only be a crime to people who have no clear idea on the motives and philosophy behind the creation of the NDDC.

You went on and on jabbing other personalities and stimulating myriad issues in plain attempt to throw the hound, but you always came back to Akpabio, the man you are after.

But ardent proof of your malicious intent was kept for your conclusion. “Nigerians look forward to seeing what the audit will reveal, provided its report is not edited. It is remarkable that the major audit firms or legal firms or even accounting firms in the country are not part of the exercise. And it will be confirmed whether those pushing and supervising the forensic audit actually have the right moral rectitude to do so”

Clearly your intent is to impugn the audit and tarnish the man Akpabio. Your mission is to cast aspersions and sow doubt before the fact of the forensic audit. In one breadth you postulate that the audit was brainchild of Akpabio and in another breadth you say ‘I am sure the President was moved to order the forensic audit following the tales of the greasy mess he had heard about the commission”. Can’t you see you are in total confusion here?

What is more important? Is it the origin of the forensic audit or its necessity thereof? I think you need to tell us the people that are so afraid of this forensic audit . It is clear they sent you.

Please do me well to publish this Right of Reply in the time avowed convention of the Thisday Newspapers to which I am a proud Alumnus.

Reading through Silas Udo’s Right of Reply, takes me back to the salient lessons in Comprehension exercises in secondary school days, one of which is to test indeed if the reader had fully understood and digested the story so told.

For Mr Udo, a long time colleague and friend, I am shocked that in a hurried frenzy to impress his boss, he deliberately(?) misinterpreted my writing and so chose to fire water bullets at my copy. And that refreshes the issues raised in the column.

First, Udo and his master chose to dance around the core issues raised, preferring to latch on to editorial inanities.

Read my column again and take note of the following:

I did not say Timi Alaibe was the first Managing Director of the NDDC. He was indeed the third, coming after Eng Godwin Omene and Senator Emmanuel Aguariavwodo (Udo’s former boss).

I did not say everything started going bad after Alaibe left the commission. I high pointed the noble feats he achieved while in office, which you could not fault.

The column wasn’t about Alaibe, but you should know there’s no how the story of NDDC will be told without Alaibe featuring prominently.

Udo did not dispute the nexus between Senator Akpabio and the various contractors mentioned in the copy.

I did not pointedly accuse Akpabio of appointing the contractor. I only raised some probing questions.

Is it not instructive that Udo was silent on the N1.9 billion water hyacinth contract which his boss cornered? Did it happen or not?

Is it not quite telling that Udo did not address the scandal on the botched employment of 300 persons in the commission initiated by Akpabio?

My friend chose to skirt around the main issues and started what is clearly a case of red herring.

Finally, get me clear. I said the idea of the Interim Management Committee (IMC) is Akpabio’s but the quest for forensic audit of the commission is President Buhari’s idea. Don’t confuse the two points. Let it be known that i have many more

Unsavoury facts about your principal’s exploits and they will be released in no distant time.

As for the forensic audit, I am all for it. Let it unearth all they who have plundered our NDDC commonwealth. I am a Bona fide stakeholder. But let the findings not be teleguided in any way.